I want to thank James Mishler for first mentioning this on Google+ or I may have never seen it. Emperor's Choice, who I must admit I had never heard from until today, is doing a retro-clone or re-creation of Arduin. 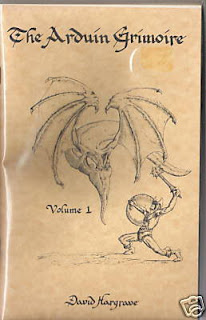 The first "Arduin Grimoires" were kind of a weird mix of an original fantasy game and a supplement to D&D. The creator of the material, David Hargrave, had a lot of creativity and personality. He was an early advocate for "hacking" other systems, and took the attitude that in some ways the game belonged to everyone. Consider this excerpt from The Arduin Grimoire #1:

"About three years ago fantasy role playing games began to become extremely popular among gamers of all types. At first it was something new and wonderful, and ideas and information flowed freely among the players.

About a year or so ago things began to change: the joyous game was becoming big business. And those non-amateur game designers took on all of the trappings of things that have profit as their main motivational force: greed, secretiveness, hunger to "control the market" and all of that other garbage.

Amateurs who tried to publish their ideas were being told to cease publication if their ideas even remotely resembled any those big business types had published. Yet those same people ripped the amateurs' ideas off quite freely, and with dismaying frequency.

This supplement is offered in the hopes that it will infuse new life into the amateur side of fantasy role playing garnes, and stimulate the free idea exchanges so sorely needed to keep this type of gaming alive and viable. This supplement does not seek to replace or denigrate any other fantasy role playing supplement or game, either professional or amateur. It could have been three times the size you see before you, but personal problems, finances ,and lack of time required otherwise."

If their goals weren't so diametrically opposed to each other, he and Gygax could have almost been friends, what with the slightly paranoid and arrogant tones. 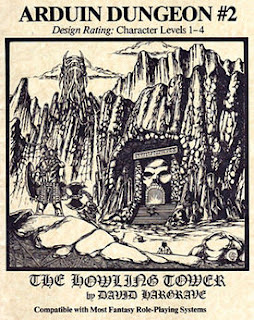 So how is the material? Its hit or miss, but when it hits, its great. Lots of off the wall classes, such as "Technos", rationally-minded scientist types who despise magic and can build robots. The early stuff had a charm that I don't think was ever fully recaptured with later iterations and releases. His piece de resistance, in my opinion, is The Howling Tower, a massive, gonzo funhouse dungeon featuring rooms made of jagged glass, mechanical tigers, and the dreaded, feared Skorpoon.

Anyway, Arduin certainly deserves a second look, and I am hopeful that this new project will focus on the earliest Arduin materials. It will be interesting to see what happens!