A 5e Must-Buy: Fortress of the Ur-Mage

"The Ur-Mage opens the doors of his Fortress once each decade, allowing the heroes and demigods of the realm to enter." With the advent of the 5e SRD and DMs Guild, the 3rd party floodgates have been opened. There was already a ton of stuff coming out anyway, but in the scant few months that DMs Guild has been up, there are over 1000 3rd party offerings on that site alone already, with more being added every day. It is probably impossible to read it all, and keeping track of even the adventures seems like a full-time job (but thank you Merric!).

Anyway, how does one sift through all of this to find worthwhile products? For every interesting idea, safe bet, and no-brainer, there are one hundred or more complete and total mysteries, abject failures, and gross money-grabs.

Well, I can at least point you to one product that I consider the first true 5e 3rd party "must-buy" that I have encountered. Don't get me wrong, there is plenty of good stuff out there, but there is only one offering so far that I really think DMs should rush and buy immediately. And that would be Fortress of the Ur-Mage.

From some of the minds that brought you 4thcore, this "tournament deathtrap dungeon" carries on their rich tradition of turning system assumptions upside down, shaking them, throttling them, then curb-stomping them into oblivion.

This is not an adventure made to gently insert into a campaign. This is a one-shot meant to test the mettle of even the most experienced players. This can be run in a tournament setting, with multiple tables attempting the dungeon at once, or with a single group. The party or parties score points based on how much they accomplish. You know that annoying thing where it is hard to gauge how long a one-shot might take? You won't experience that here. After five hours of play, finished or not, "a horde of summoned Spectral Death Knight Cavaliers atop fleshless horses" gallop through and slaughter the party. Kinky. Determined parties will want to try again and again to reach the final chamber. 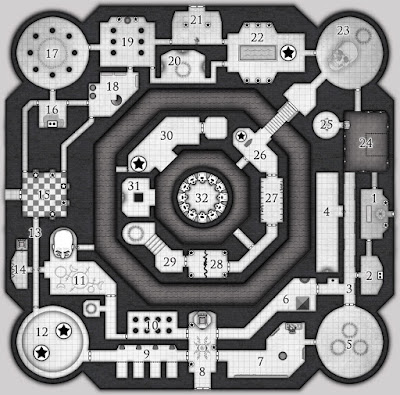 This adventure is filled with all of the trappings we have come to expect from the 4thcore crew: fantastically grim set-piece encounters, a myriad of cruel and creative monsters, powerful and interesting magic items, and killer cartography and artwork. I was so pleased to see that the legendary Crypt Thing, Robert Waluchow, had done the maps and art for this. He is a great talent.

This thing comes with everything you need to get right to it: pregens, handouts, magic item cards, everything. Priced at a mere $6.66 (!), the value of what you get here puts a lot of 5e pricing to absolute shame.

If you are looking to run an event at a convention or if you have a group of seasoned players that think they have seen it all, you owe it to them to grind their bones into powder with this module.
Published by "DDE Adventures", it is unclear what future 5e plans these demented souls have in store for us, but follow them HERE to find out.

Posted by Jeremy "frothsof" Smith at 10:31 AM No comments: