If you would like to read previous installments of this series, just click the "Polyhedron" topic link down the right side of the blog.

So issue 3 is a double issue, coming in at 32 pages. It features an awesome Erol Otus cover. The ray gun hints at things to come in the issue. 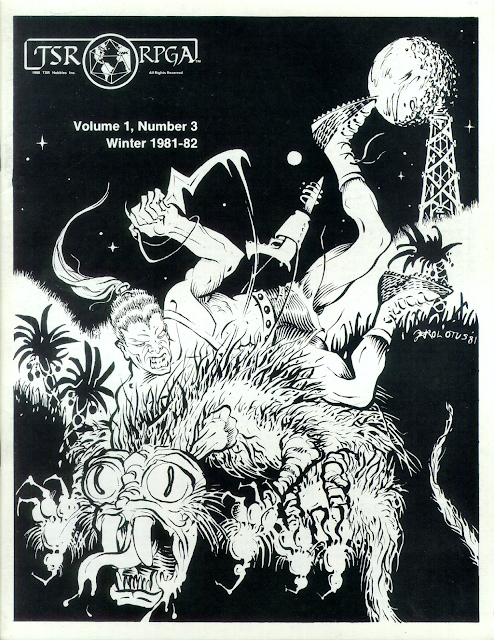 The front end material consists of notes on the RPG Scholarship Fund, "White Rabbit", which basically apologizes for delays associated with the newsletter and modules, and a little forgettable Xmas fiction piece. Mentzer pens a short column that announces the newsletter will be going bi-monthly instead of quarterly. The Letters section is dominated by reader suggestions for future content.

Dispel Confusion has a couple of interesting bits. One, a question about clarifying the use of caltrops, which I certainly would have found helpful at a young age. Two, a question about surprise segments in 1e. Poor guy's party got surprised by a group of gargoyles, and using the 1e rules to the letter, it ended up being something like 40 attacks. Needless to say, it is a rule I am happy to see gone, one that I have never used anyway, and probably an unexpected rule interaction on Gygax's part (I hope).

The main article (foreshadowed by the cover) is a long interview with Jim Ward. It is worth tracking a copy down just to read this, especially if you are a fan of Metamorphosis Alpha or Gamma World, both of which are covered in detail. He tells the story of meeting Gygax, how MA came to be, and touches on his personal introduction to science fiction and gaming. One cool thing about reading these old newsletters is seeing products referenced that either never came to be, or came out years later in different forms. In the letters section, a "forthcoming" work on fantasy weapons is mentioned; here, Ward talks about a Gamma World box set, "Metamorphosis Alpha to Omega", which ended up as the title to the 2nd edition of MA in 1994.

There is a recap of a Fight in the Skies tournament, followed by a preview of the 7th edition (Dawn Patrol).

Turnbull has a short opinion piece talking about the nature of hit points; you see many of these sorts of questions and debates even today, and I find them just as tedious.

There is a piece on miniature painting, even though I have been told numerous times on the internet that nobody really used minis prior to 4e. Whoopsy daisy.

There is a convention recap with tourney winners listed.

There is a call for submissions to a Top Secret gadget contest, a bit on cryptograms and codes (frustrating, as you have to mail off for the keys to the coded messages provided), and some more miscellaneous info on RPGA memberships and product orders.

We get another readable collection of mutants from Jim Ward. I dig Fluter the Mutated Sun Fish. This is followed by another contest, this one for Gamma World artwork.

Notes for the Dungeon Master offers traps and tricks sent in by readers. They are mainly of the goofy variety, such as polymorphing the party into fat orcs while they are squeezing through a tight space.

Spelling Bee spends a page and a half sucking the fun out of the invisibility spell. Worth reading just to feel good about your own campaign.

Saga of Marnie is a guest article by a contest winner and her GenCon experience. After a few upcoming convention dates, the issue is over.

The Ward interview more than makes up for the rest of this issue, and if you are interested in the early days of the hobby and how the first sci-fi games came to be, try to find a way to read it.

Posted by Jeremy "frothsof" Smith at 10:33 AM No comments: