You can check out other entries in this series HERE. 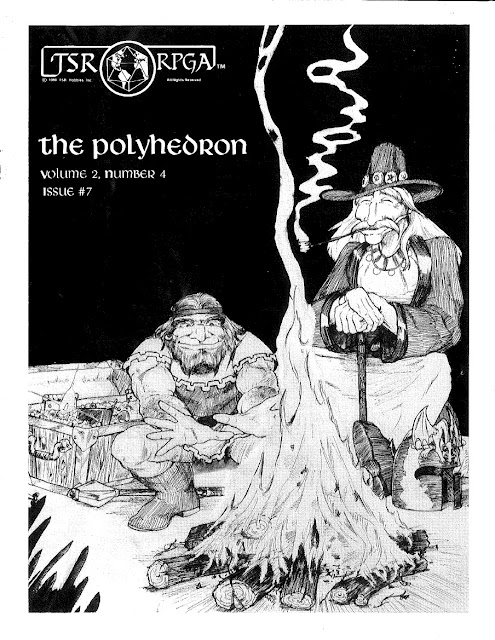 We have a serviceable, generic cover from Scott Roberts. In the editorial piece at the beginning, Mentzer mentions he is stepping away a bit from the newsletter saying "Essentially I'm to be #2, right after Gary....I hope to...reorganize the books a bit", alluding to the upcoming BECMI D&D products. This is all at some point in '82.

Nothing too intriguing in the Letters section. Dispel Confusion, which is kind of the Q&A section, explains that rangers cast druid spells at their level-7, magic user spells at their level-8. Also, ranged cure spells are called too powerful and "would need lots of playtesting before addition to a campaign".

The big interview piece is part 1 of 2 with Mike Carr, designer of Fight in the Skies and author and editor of various D&D and Top Secret products, including In Search of the Unknown, one of the most famous adventures of all time. He talks about how he got into gaming, how he worked at the Dungeon Hobby Shop, editing AD&D, that sort of thing. He waxes nostalgic about Wednesday game nights, playtesting early material with Gygax and Ward, and attending early conventions, then indulges in a little bit of a pissing contest between Gen Con and Origins, which you see a lot of in other mags around this time.

After this, Gygax steps in to address a question in a previous issue about actions per round. He basically says that D&D combat isn't meant to be a true, detailed representation of actual combat, that things are happening each round that aren't checked for ("parrying, fencing, circling for general position"), and that "combat is glossed over". This feels sort of like when he explains hit points. It is an interesting reminder of how new some of these concepts were at the time, and how some folks had a hard time balancing fantasy abstractions with reality.

Spelling Bee is surprisingly good this time, it goes through a number of Cleric spells with tips for each. It reminds me why I allow spontaneous casting as a houserule though, as many of these spells see so little play compared to Cure Light Wounds.

Campaign Clues provides some tips for Top Secret admins regarding time, scale, and how organizations might work in a campaign. I would really like to play some Top Secret sometime; guess I will have to run it myself to make it happen.

Ranch Encounters is for Boot Hill and provides, well, encounters on a ranch. There are also tables for job openings and pay. I could see this being useful for any western game. Notes for the Dungeon Master discusses replacing higher level PCs after they die, along with a few "trick" sorts of dungeon elements, including a magical corridor that shrinks the PCs without them realizing it. Actually could be pretty cool when I think about it.

There is a page on a membership drive for the RPGA, followed by a mouthwatering gift catalog. 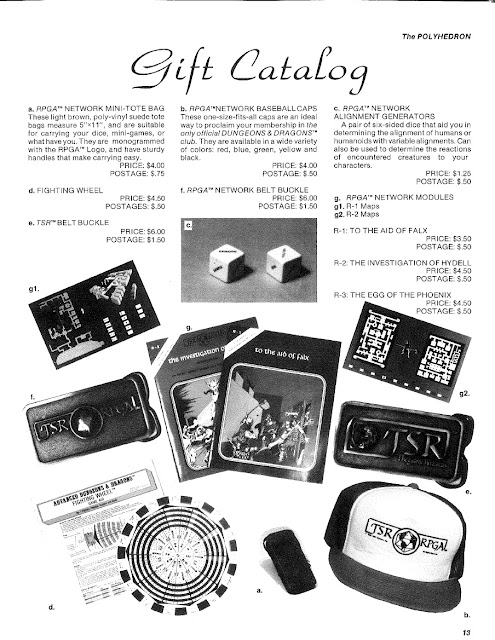 This is followed by quick wrap-up of recent conventions. The issue ends with another Nor comic, which is actually getting pretty good.

All in all another fascinating little peek into the gaming of yesteryear.

Posted by Jeremy "frothsof" Smith at 9:52 AM No comments:

The Fourthcore Crew Have a New Kickstarter Up: 5e Team Deatchmatch

I was a big fan of 4thcore. Some of those folks have moved on and now do some cool stuff for 5e. It is weird, I just recently heard about some kind of upcoming 5e competition series that is going to be live-streamed, then a few days later I was made aware of this. My money is on this being waaaay cooler than whatever the other thing is.

It has already funded and the thing is apparently already written. These guys are endlessly creative and really know how to kill...errr challenge a PC. For more on what they do, check out their home base, DEFY DANGER.

Posted by Jeremy "frothsof" Smith at 2:05 PM No comments: