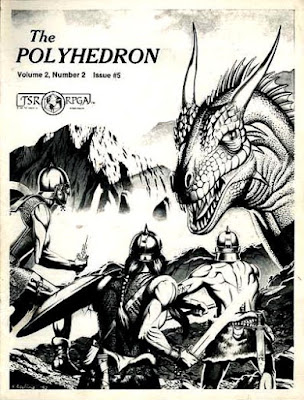 Issue #5 follows the pattern of the other early Polyhedrons, with the main feature being an interview. In this issue we have part 2 with then-Dragon editor/publisher Jake Jaquet. Unfortunately, the substance is not all that compelling, mainly dealing with RPGA membership info and Dragon mag not being a "house organ". No really interesting tidbits. He badmouths the Fiend Folio a little bit.

The art throughout is hit or miss, with a recycled Tramp image and a cover with some super shiny helmets going on.

There is a plug for a TSR belt buckle I wish I owned. Talk of the R series modules being late.

Notes for the DM has tips on balancing encounters vs the number encountered roll. Some readers offer sadistic ways to kill PCs, such as ten foot pole mimics.

The Round Table recaps some tournament play from GenCon XIV. Dispel Confusion clarifies some rules. Dragon breath does damage equal to starting hp in AD&D, current hp in Basic. Saddlebag carrying capacity. Enlarge spell info. Bag of Tricks offers a few tips from readers, none of which are really worth noting. Crappy issue so far.

Spelling Bee reprints a couple of spells from Against the Giants, "Crystalbrittle" and "Energy Drain". Crystalbrittle turns metal into fragile crystal, which is ok, but for a 9th level spell it is awful, especially since it is 9 segments and you need to touch the item.

We get some tips on mini painting, some cryptogram puzzles, and a list of RPGA charter members. A Top Secret gadget contest and Gamma World art contest are mentioned.

The issue mercifully ends with a Nor comic in which nothing happens.

Probably the worst issue yet, they can only get better from here!

Posted by Jeremy "frothsof" Smith at 9:56 AM No comments: