Well, if you can't tell by the cover, Gangbusters has been released, and this issue promotes it with a cover image and a couple of articles. This issue is also a much more professional looking affair, with more artwork throughout and a more consistent layout. It is no coincidence that it is the first issue under new editor Mary Kirchoff. 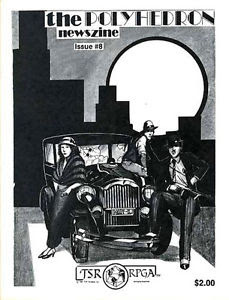 The Letters section is pretty standard fare. There is some reference to late issues being sent out, and you can tell that they have gone through the natural, expected sorts of struggles getting this off of the ground. The White Rabbit column suggests that the logistics of doing this sort of thing back in the 80s were nightmarish, with its talk of bounced checks and Canadian exchange rate fiascos.

The main section is part two of the Mike Carr interview. After some discussion of Fight in the Skies, the conversation moves to Top Secret. The most intriguing tidbit is what Mike mentions regarding the early draft. He says it was not so much a roleplaying game and was more "pre-programmed...with more of a flow chart type of arrangement". It would be interesting to see what that looked like. 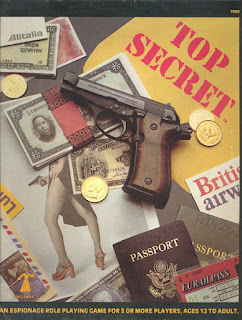 Encounters is a new column that basically makes a little mini-scenario out of the cover image. So here Jim Ward does this Gangbusters shootout with Big Bernie, Lefty Fingers, and gun moll Maria Kirchinetti.

Someone must have pissed in Mentzer's cornflakes before he wrote this installment of Notes for the Dungeon Master, as it is solely devoted to screwing players over in sadistic ways. He gleefully suggests rear surprise attacks with carrion crawlers ("Ever see what the player...looks like when he's got to make 40 saving throws...before doing anything?") and casting time stop to steal spell components just for kicks. Sheesh.

Figure Painting is what it sounds like. Nerd's Quest is a forgettable fiction blurb. Rune Scry is a cryptogram puzzle.

Mentzer's Spelling Bee encourages strict record keeping of spell components as a way to control spell use in your game. It is really up to you if you consider this good advice. The main issue for me is the game could just paradoxically become a quest for spell components if you follow the 1e rules to the letter. However...there is a certain romantic quality in forcing your MU to carry around a live carp. So I am torn.

Mark Acres, one of the designers of Gangbusters, presents an article on starting a GB campaign. It is short but provides sound advice on different types of characters, NPCs, and motivations. 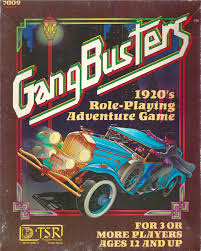 Dispel Confusion mentions that it is the only official source for rules answers and that Sage Advice in Dragon is more or less opinion. I found this interesting. We learn you can't haste a hasted creature. A bard returning from a long journey in which he gained 20k xp is out of luck, he can't train past 2nd level and really only gets credit for 4k. Sorry bud.

There is a little comic. Kim Eastland is now taking over as RPGA coordinator from Mentzer, as Mentzer will be devoting his time to what will become BECMI. The issue ends with a catalog page and membership drive info. I don't know if this means the Nor comic is cancelled or coming back.

Well, there is the sense reading through these that they are slowly getting better. I can't recommend tracking down print copies unless you are a really obsessed collector; there just isn't a lot of useful gaming material. At least not yet. If you are hardcore into Gangbusters though, you might try and find it.

Posted by Jeremy "frothsof" Smith at 9:35 AM No comments: