So today I am reviewing The Blasphemous Roster by Michael Raston with Ben L and Trent B. The layout is by Luke Gearing. 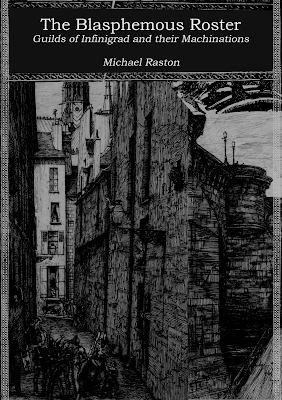 So, Raston's home game is set in and around a sprawling, aged, and corrupt city called Infinigrad. The city is filled with competing Guilds that hire "Guild Dogs" to do their bidding. What this book does is give you tons of random tables to create the Guilds and generate missions for PCs to attempt for them.

The first thing that jumps out when looking at this is the layout. The layout feels like the DIY punk and skate zines of my previous life, with tons of public domain images presented collage-style throughout. It feels very much at home within the current OSR zine scene. 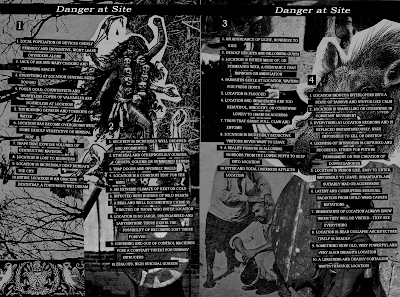 The table content is varied and interesting. The tone itself is on the weird and dark side, with a hint of gonzo. The adventure generator is particularly strong, offering tables for the target of the job, what the Guilds want done with it, the location of said target, the danger to be found there, and finally the reward. Let's try one.

Let's see what that Guild of maniacs wants this time. Hmmm...they want us to find this mad scientist sort of dude. Apparently he needs to be "revived or resuscitated", so who knows what the hell happened to him. We are given a lead about some sleazy flooded bathhouse. Ah, perhaps he drowned? This all sounds dangerous, even for us, but the Guild is promising us a tamed monster for our troubles. We're in!

Man, I sure do enjoy rolling on random tables.

I would recommend this to folks that are into OSR zines and random tables. You know who you are. There is enough content here to generate a lot of gaming material. I think I will enjoy this most in the printed format, as that will allow for easy flipping from table to table, and seems to me more suitable given the zine feel of the product. I can't say as to whether the layout will be for everyone, but I like it. Another thing that was cool about reading through this was getting to peek into someone else's campaign. The setting is very gameable, and the Guild device, while not wholly original, provides an endless stream of adventures for PCs. I would be interested in seeing other Infinigrad supplements that reveal more about the setting.

Check The Blasphemous Roster out in pdf HERE and in print HERE!
Posted by Jeremy "frothsof" Smith at 8:18 AM No comments: