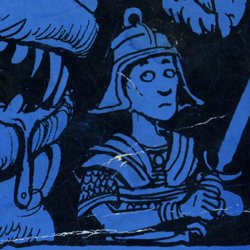 Hey everyone. If you have wondered what the deal is with no updates, I have been sick and my daughter has been sicker. Preschool is a dark and dank cesspool, as grim as the darkest dungeon. I apologize for it, but only parents will probably understand it. Anyways, I just wanted to quickly point out how awesome this convention will be to attend if you are in the Toronto area. Hang out with Mentzer and Greenwood? What else is there to say? I wish I could be there. There is a push to get word out about it, because some folks involved in the OSR have fallen off of the face of the earth. So if you are in the know or have friends and fam in the area, please repost! Ok?!
Posted by Jeremy "frothsof" Smith at 5:40 PM No comments:

Though Dungeons and Dragons will always be my first love, a close second is Chaosium's classic horror RPG, Call of Cthulhu. Although these games are distinct and have many differences, there are still some ideas from CoC that you can port right over to your D&D game. Lets take a look at some ideas.

One of my favorite adventures of all time is Masks of Nyarlathotep. I cannot say too much about it because I will be running it soon for my home group. The reason I bring it up is that it is in a "sandbox" style; players can follow clues literally to all corners of the world, and it doesn't matter in which order they pursue them. Some are related, some aren't. Each chapter presents a little table of the clues in that chapter, and where they lead. That is the part I want to focus on.

Some DMs aren't ready to run a true "do what thou wilt" sandbox, or they simply don't want to do that in the first place. A DM sometimes makes a "pseudo-sandbox", where they have prepared several scenarios or adventures, and the players basically choose which one they pursue. It feels like a sandbox to the players, but it is actually under DM control. Other times, the DM has a specific adventure or scenario he/she wants the players to play, and all roads point there. 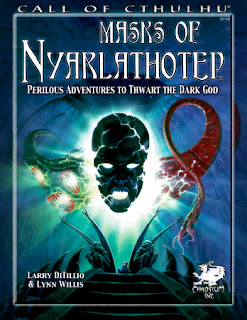 Whichever your style, consider using a "clue drop" to give your players options. In Masks of Nyarlathotep, investigators might discover 4 or 5 seemingly unrelated clues at once. They then have the freedom which to follow now and which to follow later. There are innumerable ways to do this. Maybe they find several disparate leads in the pockets of an assassinated lord. Maybe they return to collect a fee for a deed, and the benefactor's house is burned to the ground, with just a few smoldering clues. Clues could lead them to the ends of your "earth", to remote libraries, shady traders in dangerous port cities, or to dangerous ritual magic. Think of a few locales and scenarios that you think will be fun for both you and your players, and then drop a few clues leading there. Those apparently unrelated clues could eventually fit together into a complex plot line.

Ah, insanity. Perhaps the most ground-breaking mechanic of CoC. For the uninitiated, Cthulhu investigators slowly (and sometimes rapidly) go insane. It is really just a matter of time, as the more crazy stuff they discover, the more sanity they lose. Fun stuff. The Ravenloft campaign setting of 2e "stole" this a little bit, and added its own twist to it. I am suggesting using a totally simplified version.

Basically, if a PC encounters something truly weird, alien, and horrifying, you might check their sanity. In D&D terms, seeing creatures from the Far Realm or the Abyss might qualify for sanity checks. Have a PC roll a saving throw. On a failure, the PC might suffer some slight effect...at first. They might automatically miss their next attack roll, be stunned temporarily or immobilized, be forced to run a few feet in terror, etc. PCs will only have to make a check once per creature or group of creatures. If they fail numerous sanity rolls over a short period of time (multiple encounters), they might have a more permanent insanity or disorder. You can get funny or stark with this depending in the tone of your campaign. They could maybe develop something as silly as a fear of dwarves, or something as depraved as fecalphilia.

ATTRACTING THE ATTENTION OF LAW ENFORCEMENT

In CoC, the investigators might be armed to the teeth, but treating 1920's New England like the wild west is going to quickly draw the attention of local police. Consider making certain towns and cities in your milieu to be very anti-weapon/violence. Maybe PCs cannot even wear armor. This immediately adds an interesting pressure to the PCs; maybe they have no problem tracking down a villain, but with the risk of attracting 100 soldiers or constables, they have to get creative with how to take the villain down. Not every town appreciates having the hell blown out of it by adventurers.

In CoC, using spells and magic gradually drains an investigator's sanity. It also costs "magic points", which are derived from an investigator's "power" or force of will. To keep this simple in D&D without requiring a lot of mechanics, consider dropping a few powerful ritual scrolls in a treasure parcel. While the power might be tantalizing, what the players do not realize is that the power comes with a price. Casting the spell might prompt a sanity save, and failure could cause temporary insanity, possession or whatever else you can think of. 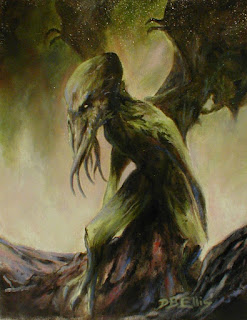 One of the first things you learn playing CoC is that you stand no chance in hell of taking on a Great Old One with your little pea-shooters. It is best to run as fast as you can, but if you have already seen the entity, it may already be too late. I have talked before about players' sense of invulnerability, primarily in later editions of D&D. Fleeing an encounter is a completely foreign concept for many D&D adventuring groups. On rare occasions, consider presenting the PCs with a truly unkillable foe. This helps them keep perspective about their place in your multiverse.

Other ideas you can port into your D&D game from CoC include conspiratorial adventures, encouraging research (libraries, government records), and perhaps even designing your own Cthulhu-related themes (Professor, Antiquarian, Private Investigator).

I hope you got a few ideas from this article. Those of you still waiting on the conclusion of my stronghold rules, I have made progress but I am still not done perfecting the costs and construction formulas. I am, sad to say, not the fastest writer in the world. It will be done eventually. For those that have followed me in anticipation of my 4e fanzine, I swear I am getting close. I am waiting on some material from others, maps, illustrations and the like, and as they are being provided free, as favors, I am just letting everyone take their time. It has blossomed to over 150 pages, and it will be worth the wait in my estimation.

At any rate, I hope everyone has a good weekend. If you have any ideas on how to bring some CoC goodness into D&D, please leave a post!
Posted by Jeremy "frothsof" Smith at 11:57 AM No comments:

So this has been floating around on multiple sources, but as I almost missed it, I am re-posting in hopes that others get as big a laugh out of this as I did. These guys take an episode of the old D&D cartoon and overdub their voices over it as if they are playing D&D. Some brilliant stuff on here: