I have been playing around with a new monster type, the Savage. A Savage is an Elite monster that is buffed up enough to challenge a party as a Solo. They can hit hard without taking without taking all night to run. Since they die more quickly than a traditional Solo monster, you can afford to be a little swingy with their offensive power; their lower hit points are balanced by their "savagery". 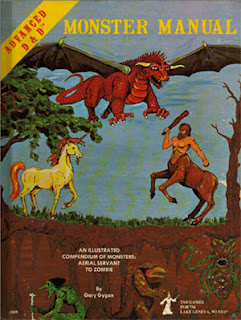 A Savage will typically have many, if not all, of these features:

I'm using them in Ravenloft currently and they can hit you hard without taking all day.

Look for some example Savages on my blog soon!
Posted by Jeremy "frothsof" Smith at 8:25 AM 5 comments:

If you haven't heard of this...

FOURTHCORE
Posted by Jeremy "frothsof" Smith at 5:23 PM No comments:

Email ThisBlogThis!Share to TwitterShare to FacebookShare to Pinterest
Labels: Dungeons and Dragons, fourthcore

On the 4e forums the subject of random encounters came up. Most complaints really came down to encounter speed in 4e, or just hatred of random aspects in the game.

Random encounters can work great, but remember you are rolling for 'wandering monsters'. If used correctly this adds flavor and doesn't necessarily lead to combat.

In B/X D&D,  movement as you might recall was a little different. There was the combat round but also a unit of time called a 'turn'; this is 10 minutes. Your speed in an encounter, say you have speed 6 on your PC, that is 1/3 of your 'exploration speed', or how far you can go in a dungeon in a turn (10 minutes). This assumes you are kind of being cautious and 'mapping' where you are at. So, say for a 4e PC w speed 6, your exploration speed is 3*6 or 18 squares

Any encounter is assumed to take a turn even if it doesn't; the rest is made up by the short rest or looking for treasure or what have you. Any time you disable a trap, that takes a turn. Stop to work on a stuck door, takes a turn etc. and anytime you have a PC move 18 sqrs thru a dungeon it has taken a turn. In B/X, you had to rest once every 5 turns, or 10 minutes of every hour.

Now remember in old editions a monster was really just a blanket term for anything you came across; in 4e it is more accurate to say 'roll for random creatures'. You can have memorable, flavorful random 'encounters' that dont all have to be combat based. There is also some cool random flavor. Here is an example table.

Roll for wandering creatures once every 3 turns.
A roll of 1 on a 1d6 indicates an encounter. Then roll a d8. If you roll the same thing twice, reroll it.

1. 3-8 Eladrin explorers looking for a relic
2. 5-10 Gnomes carrying the carcass of a large creature
3. A sleeping (snoring) adventurer lying in the hallway
4. A large swarm of bats flies by; the walls are covered in guano
5. 2-12 giant rats feeding on dead bodies; they scatter when seen
6. A woman tied up in a corner with a gag over her mouth
7. 5-10 rot grub swarms gestating
8. 3-10 monks meditating in front of a strange image on stone a wall

If you really want to kick it old school and test your ability as a DM to improvise, you can roll the reactions of intelligent creatures randomly.

Roll a d6
1. Run from the pcs/scared
2. Hostile
3. Indifferent
4. Friendly
5. Beg the PCs for help
6. Act friendly and ask to join PCs, then betray them first chance

This is literally just off the top of my head. Hopefully it gives you some ideas on how it could add a little unpredictable flavor to your game.
Posted by Jeremy "frothsof" Smith at 7:12 AM No comments:

rarely do I use a minion these days that doesn't have some kind of extra oomph.

try having minions explode in an aura 1, leaving a zone (noxious fumes perhaps?) that does level appropriate damage when a creature starts in it or enters it. it changes the movement strategy of the pcs quickly and makes it more interesting.

another favorite is having your minions attack everything adjacent to them when they die, berserker style. or mix the two; when you kill one minion it chain reaction kills the other which explodes into noxious gas. try using a ton of these on the table for an unpredictable explosion of violence.

-Solos-Immune stun, dominate; save at beginning and end of turn

-Give them both a multi-attack if they don't have one.

-Add an aura or effect that does automatic damage if the creature doesn't already have one. about 10 damage at the end of heroic, 15ish by the end of paragon, and 20+ at epic depending on your party.


These things are easy to remember and they work. You have probably started doing some of these things already.
Posted by Jeremy "frothsof" Smith at 6:00 PM No comments: