The Last Word on Edition Warring 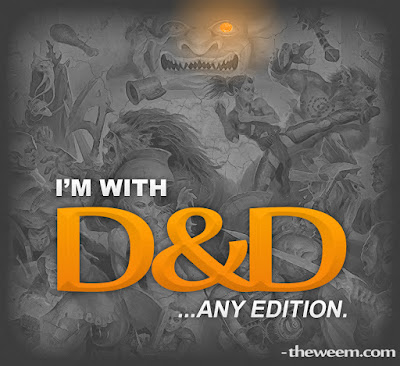 Man, if there is one thing I can't stand it is edition warring. I get if you don't like a game, but to go on and on and try to belittle and insult someone else for liking something you don't is just lame. The other day I saw legendary Frank Mentzer step into an edition war and just shut the whole thing down. I thought I would reprint what he said, bc I consider it to be the last word on edition warring. A definite mic drop moment.


"In the 1970s, wargamers bashed the new 'roleplayers'.In the 1980s, my D&D RedBox sold more than 40 million copies in 20+ languages. 1e and 2e rose to ascendance in English languages countries, and RedBox ruled everywhere else. Estimates put the total players at more than 100 million.In the 1990s, roleplayers bashed the new CCG players. RPG use was dropping like a rock (possibly as low as 1% of the peak number), and TSR died. The new owners of D&D tried to find out what the remaining players wanted, and heard only noise & chaos. Each group -- 0e, 1e, 2e, Moldvay, BECM -- seemed to be fixated on their own edition, and bashed the others.Since the gaming public was full of opposing factions, the new owner (Wizards) wrote v3 based on their own ideas. It proved so full of holes that the errata came out en masse. (The heavily amended result is what we call v3.5, which took 3 years of error-checking and corrections.)In the 2000s, the 'edition wars' focused more on newschool (rules-heavy style) vs oldschool (rules-light), and were still rampant.In 2008, again following their own ideas by necessity (faced with a disorganized and warring hobby), WotC produced 4e. It was wonderfully written, well-organized, played much faster than 3.5... and missed the hobby market almost entirely, being aimed at young folks who grew up on computer games. Almost simultaneously another wiser company created their own version of 3.5 (Paizo's Pathfinder), which continues to dominate the market.


But in the 2000s, many realized that the Edition Wars were self-defeating. The hobby had become disjointed, no longer able to express a concrete preference. Some of us started working HARD to wipe out Edition Wars, self-censoring our negative personal opinions and promoting the entire hobby, not just our preferences. We actively tried -- and are still trying -- to minimize the useless conflict that has so severely damaged both the game and the industry.In part due to this change in the hobby (less conflict), WotC reached out for input on what "D&D Next" (v5) should be. They got better input than they expected, and changed the design many times to reflect the preferences of the potential customers.I'm proud of the role so many played in redirecting the energy put into Edition Wars into more productive ideas and avenues for gaming. The list of industry celebs pushing for harmony is very long and distinguished.But we in the hobby industry still regularly deal with those who cannot or will not see the big picture. Some claim "free speech" as a means to tear down the hobby and/or its parts. Some claim "honest difference of opinion" (often while hurling hateful epithets and accusations). Whatever the claims, the results are clear: the more conflict you promote, the more the hobby fractures, and no one who create new games will be able to hear what you want.We in the hobby who are trying to make better games see and hear your refusal to cooperate, refusal to contribute, refusal to be positive. All you do is destroy. We do not listen to you. You have no voice.I have 35 years of experience in the hobby gaming industry, and I wrote the best-selling version of any RPG ever made. But ignore all claims of Authority and make up your own minds, based on the Facts. Break free of your prejudices and broaden your view; see the direct effect that negativity and conflict has on the hobby. And then try to be more positive, accepting that all versions of all RPGs can co-exist peacefully, and make your voices heard in positively advocating the types of games you want. People will listen; your voice can make a difference.But If you remain hateful and negative about games, that message will also be heard, and you'll only get what others think they can sell you -- regardless of what you want."-Frank Mentzer
Posted by Jeremy "frothsof" Smith at 7:15 PM 8 comments: