So I thought I would make this post as the GenCon excitement has reached a fever pitch. People have arrived and lines are forming. Not I. For millions of gamers, it just isn't feasible. The biggest reasons for me are family related, but you could point to a myriad of reasons one might not attend, from cost, to work-related issues, to living outside of the US, to just not wanting to brave a crowd of tens of thousands of people.

I have always been the type that would rather watch a football game or other event on the boob tube rather than pack up the fam, deal with traffic, and ultimately not have the greatest view in the world. Of course, there are exceptions (like that Pink Floyd concert back in the day), but by and large, as long as I can see/hear what happened, being there in person is not crucial to me. In the case of gaming conventions, I can always catch up on seminars through social media. Important news gets around quickly, and the twenty minute delay in hearing the news is not such a big deal to me. Likewise, while I do collect a lot of old RPG materials, I cannot see myself waiting in line for things like free commemorative dice sets. There is nothing wrong with that at all, and I do not mean to sound judgmental; I am just speaking for myself. If I want an item badly enough, I can bid on it or find another way to get it. Anyway, I say all of this just to set up my point. There is ONE thing about conventions that has always made me jealous of those that regularly attend. The gaming. The near-constant gaming.

In my home games, I am always the referee. Always. I actually don't have a lot of folks nearby that would have ever even have played RPGs if I hadn't have invited them. This is fine and good, but I like to play too. I like to play old games. Obscure games. Brand-new games. All kinds of games. Conventions give you the ability to immerse yourself in a variety of games with other like-minded folks. That has always been the "draw" for me.

For years now, I have supplemented my in-person gaming with on-line gaming. I have always used the VT that WOTC tried to develop. It is a pretty simple program to use, and it works very well with 4e D&D, and other editions to some extent. It is limited though. It is not terribly well-known. In fact, when VTs get mentioned, it is rarely listed. It is also very much centered on 4e, which is fine, but it limits its appeal. There were other games I wanted to play, and for a long time it seemed like the only way I would get to play them would be to run them myself, likely with a group that wouldn't even be all that into it. Then I started exploring Google+.

About 4 weeks ago, I started to explore G+ more thoroughly. I had ignored it before; it just seemed like another pseudo-Facebook type deal. Come to find out, it is a gamer's paradise. Dozens of obscure, forgotten games have found a home there. New RPGs are playtested. Free materials are shared. And lots and lots of games get played.

Within the first 20 minutes, I was approached about playing a game of Boot Hill. I nearly swooned. Boot Hill? I literally do not know anyone but the local game shop owner that has even heard of it. I have had a player-in-waiting, The Albuquerque Kid, for years. Powers and Perils? Yes sir! Oriental Adventures? You don't say? Numenera? Why not? Mutant Future? Let me at it. Night's Black Agents? Holy moly! Pathfinder as far as the eye can see. D6 Star Wars. Shadows of Esteren. Dungeon Crawl Classics. Cthulhu. The opportunity to play games of all varieties is staggering. 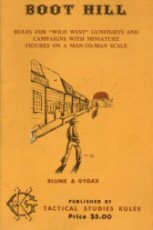 I got to play in an OD&D game for the first time in years. I got to playtest the latest 5e packet. And the games just keep coming and coming. I don't have time to play half the games I would like to. If I had this while I was in college, I may have never graduated.

There is no real cost of entry. Most games are played on free tables, usually Roll20 being run through a Google "Hangout". You will likely need a mic, but that's about it.

Now, I am sure I sound a bit noobish to many. I am certainly late to the party, as there are already thousands and thousands of gamers taking advantage of it. All I can say is, better late than never. Anytime I want to find a game, I can pretty much just hop on, click around a bit, and find something going on. There hasn't been a day that has gone by that I haven't seen a game posted that I would love to play in.

Another bonus is that there seems to be a dearth of assholes. I am not saying they don't exist, it just seems like there is a lot less cynicism and edition-warring on G+ as opposed to the typical forum. I hope it stays that way. Everybody I have met has been cool.

Anyway, while you might be down in the dumps about not making it to GenCon for whatever reason, if what you feel like you are missing is the sheer GAMING, all I can tell you is that everyday is a convention on G+. Freelance designers share ideas, gaming companies preview materials, freebies flow like water, gaming news abounds, and most importantly, ACTUAL GAMES are going on near-constantly. So, don't just sit there feeling sorry for yourself! Get on G+ and find some games!
Posted by Jeremy "frothsof" Smith at 1:17 PM