In Search of Strongholds, Part 6: Get to the Good Stuff


Welcome to the penultimate installment of my blog series on developing a stronghold system for 4e. It has taken a lot longer to get this all written down than it took to put it together in my head, but that is the way things go sometimes. Check out the previous installments if you need to catch up: Parts 1, 2, 3, 4, and 5. Today's post largely shies away from mechanics and instead focuses on the philosophy and reasoning behind my design decisions.

Here at Frothsof 4e, I try to keep my DM advice practical and specific. I personally do not enjoy reading DM advice posts. You can learn more by DMing one session of a game then you will ever learn by reading someone's blog, or even worse, a DM "self-help book". Specific advice on game elements is fine, but I believe everyone should make their own path as far as pacing, adventure styles, preparation, and all of the the rest goes. When it comes down to it, there is really only ONE bit of advice that I consider crucial enough to stress to a new DM, and that is to get to the "good stuff".

I have applied this mantra to my stronghold rules. I asked myself, "What is the "good stuff" when it comes to stronghold systems?" This also begs the question, "What is the bad stuff?" Well, everyone is different, but for me the "bad stuff" regarding strongholds and domains would be too much focus on the minutiae. Too much accounting. Too much resource tracking sucks the fun out of it for me, and makes it feel like school work. On the flip side, there is a lot of "good stuff" about stronghold systems that appeals to me greatly. I love the idea of carving your own place in the world, clearing hexes old-school style, designing what your stronghold will look like, roleplaying the construction and hiring of retainers and armies, attracting townsfolk to the area, and of course, eventually making a profit. 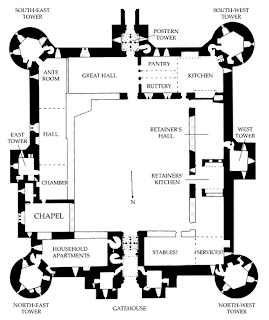 The question now becomes, "How do you get to the good stuff with only a modicum of soul-killing accounting?" Well, we start where every stronghold system starts: finding a suitable location to build. This should always be a joint exercise with the DM, and should always fit into your campaign world. My own completed, edited rules ("Baronies and Barbicans") will appear in issue #2 of 4e Forever, and as such, they will reflect the 4e Forever world. So the seemingly simple act of selecting a locale will vary widely depending on the campaign.

The DM should draw a map on hex paper. Use large hexes. It doesn't have to be very detailed, but it can be if you want. As for scale, I suggest using 1 to 3 mile hexes. The DM should note any special geographical features. Select a hex to be the building site. The PC(s) must then clear the area of monsters in a 3 to 6 mile radius around the site. This can take as long as you like and can constitute one or many adventures in and of itself. You can use random tables or design detailed adventures. The party can do all the work themselves or hire soldiers and mercenaries. Whatever the case, building should not start until the area is cleared. 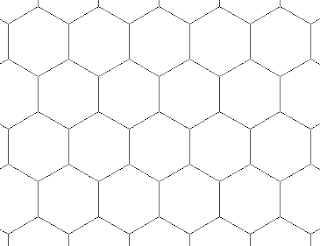 So far this should sound pretty standard. Here is where it gets a little different. Traditionally, here is where you will start having to itemize everything. Every individual salary of everyone hired from potboys to engineers. Every single door, bastion, and tower. Formulae for construction time based on the number of workers. Wall footage. Armies. It starts to get tedious fast and the fun quickly gets sucked out.

That is why I came up with an idea for simplifying the building and staffing process. Now, I have talked before about how I could care less if my numbers are "historically" accurate. Its a fantasy game. I want them to make sense, but I do not care if they accurately portray medieval life or economies. If you disagree with this style, this system will likely drive you bonkers.

Anyway, you will still want to roleplay the hiring, building, and so forth, but I have "bundled" the necessary expenses for building and maintaining the property into two "packages". A DM could extrapolate further based on these packages if he or she wanted to make it more complex. The idea is that you spend a set amount of money. I have used round numbers for ease of use. The numbers are based on the stronghold construction taking a year (in the game world) to complete. All of the materials and labor costs are rolled in together. This includes a Sage whose magic presumably helps with the speed of construction, as well as the cost of fielding a smallish "army", whose size varies based on the amount spent.

I present two options, one priced at 50k and one for 100k. That is the total cost for the first year (i.e. construction, salaries, army, etc), payable all at once or by the game "month". After the first year, there is a set amount you pay in perpetuity for upkeep of the property, patrols of the previously cleared area, and maintaining your armed forces. After the stronghold is built, settlers automatically move into the area and begin paying taxes. After a couple of years you break even, and from there you start to make a modest profit. The hard numbers for this will appear in the next installment of the series.

Here is an idea that I am really proud of. I have always loved looking at the little drawings of castle components in OD&D and the Judges Guild's Ready Ref Sheets. Designing the look of your keep or manor is definitely part of the "good stuff" in my book. What sucks is trying to tally it all up piece by piece. I mean, how many doors do I need? 60? 43? How long does this wall need to be...and if I make it such and such length, what about the moat? Argggh. Fun=gone. Well, my idea is that instead of itemizing and accounting for each little piece of the stronghold, the cost of construction instead provides you a certain area of space. You can then use whatever architecture you want so long as it fits in the area. This area should be depicted on graph paper, and involves a combination of length, width, and height. So you don't have to worry about counting doors or towers or any of that. You are just restricted by the size of the stronghold, not by the "look". Make sense? Like I said this isn't "accurate", but it works. It is a way to embrace the fun parts of traditional stronghold systems, while doing away with the nitpicking. 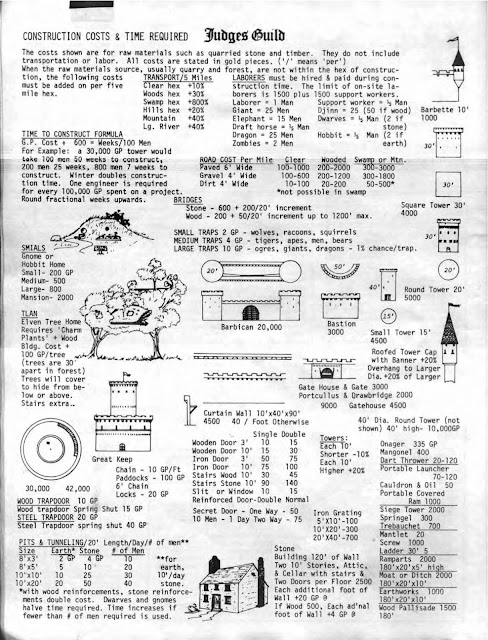 So that is it for now. I will provide some numbers and breakdowns next time and summarize the blog series. You will have to wait until issue #2 for everything to be edited into a final presentation. My wife is going to be drawing the stronghold components, and I will be aiming for it to feel as close to the OD&D and Judges Guild's drawings as possible!

I would love to hear some feedback. Let me know what you think about these ideas!
Posted by Jeremy "frothsof" Smith at 1:39 PM