Well, issue one of my fanzine 4e Forever has come and gone, and all I can say is that the response blew my expectations out of the water. This is obviously a niche product: a zine focused on a recently "cancelled" edition, and one that centers on high-level play, traditionally the least played "tier" of all editions. It also incorporates a lot of old-school elements, which, if you believe everything you read, is diametrically opposed to 4th edition. Well, the response proves that was a lot of bunk. I have had die-hard OSR guys congratulate me, and people that have only played 4e tell me I peaked their curiosity for classic editions. It seems a lot of the loud voices on the internet do not represent gamers as a whole.

I want to give a special thanks to those that shared this with others. Several people blogged about it, shared it on websites that I had never heard of, and some generous soul even took the time to index the issue on RPG Geek. Thank you. If anyone liked it or knows others that might, please continue to share it.

I thought I would give a short Q&A regarding some questions that arose from readers.

How often will 4e Forever be published?

There is no set schedule. A lot of it depends on real life and how many submissions I get (see below). It will be irregular, that's for sure. 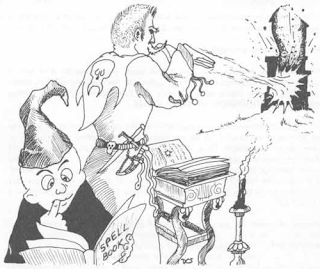 Can classes other than Arcanists use spell research?

Yes. I left it as Arcane classes only in the mag for old-school flavor, but in retrospect, I should have clarified that.

You mentioned the rate of pay for hirelings based on level, but there was no list of hirelings.

A list of hirelings will appear with the stronghold rules, whenever I get them completed. In the meantime, a DM can just improvise based on common sense. For example, a blacksmith is a very common occupation, and even small villages like Hommlet will have one, so assign them a low level. In contrast, a sage that specializes in ancient astrology might be incredibly rare and command a higher wage. The less common the occupation, the higher the level. This also applies to supervisory roles, like in the mag example.

Does a Savage's extra attack on its initiative +10 work like some of the more recent 4e dragon designs? Do they get one action or a full set?

Yes, it is basically the same thing. How many actions is up to the DM. Note that a Savage is not required to use all of the features listed, but it will typically have many of them.

A DM should control hirelings, while the players control their henchmen.

What happens if the PCs level up and they are in an area with no henchmen to be attracted?

If the PCs are unable to be approached, then no henchmen are attracted, but if the PCs are in any location where populations of Humans or Demi-Humans are nearby, henchmen should find them.

I am THRILLED that I have already received a few submissions. I want to talk a little bit more about them. I am COMMITTED to making it smooth and easy as possible for you to submit material. Therefore, if you need help converting monsters to the new stat block, I will do it for you. I you have questions about the world or need guidance on any of the rules, I have an open line of communication. If you have "system neutral" material, such as random tables, by all means, send them in; not everything has to scream 4e. You might have something you submitted to Dragon or Dungeon that didn't get printed. Consider reflavoring it and sending it in! If you want to contribute to the zine, I promise I will do everything in my power to make it happen. So please, consider sending something in, or tell a friend that you think might be interested about it. Again, you can email submissions to frothsof@gmail.com .

Well, I just want to once again thank everyone for checking out the zine, even if it wasn't your thing. It is now my most popular blog post by a million miles. If anyone runs any of the adventures, let me know how it goes! I know that at 150+ pages, many of those who downloaded it may not have had a chance to finish reading it, so please keep sending me feedback. Thanks again!