Wow, time flies. Hard to believe it has been over a year since I did this original post on megadungeons in 4e. Now that my zine 4e Forever has come out with the first level of a megadungeon "serial" adventure, I feel like I learned more about using these behemoth settings with the 4e game, so I thought I would post a part 2. 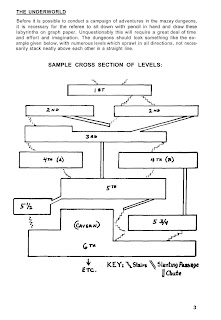 I noted how 4e combat speed can effect the pace of a megadungeon. You cannot populate every room with a 4e set-piece encounter and ever expect to finish such a thing, let alone enjoy it. But here is the dirty little secret: 4e's skill system works GREAT for exploration. Sure, you sometimes have that annoying player that rolls perception every 5 seconds, or the guy that detects magic on everything including a dead squirrel (adventure idea?), but overall its pretty no-frills and gets out of the way of the actual game. Exploration is one of the great joys of dungeons in general, and megadungeons in particular. A megadungeon gradually reveals itself. Each room is a thread of the tapestry. The story is in the exploration, how different areas of the place relate to each other, and the relationship of the creatures inhabiting the place. Even something completely "funhouse" like Tegel Manor has a sort of hidden rationale that only becomes apparent when you can finally step back from it and look at it all at once. Kind of like those 3D posters where you blur your eyes?


I am convinced that pacing is the key of running a 4e megadungeon. If you check out the first level of the pyramid in "Tales of the Lost City" from my zine, you will notice that out of 49 rooms, there are only 9 or so encounters, some of which might not even happen. I am not saying there is some pat and easy formula, but you want your design to really lean towards exploration. Having run I6 Ravenloft for 4e, Tegel Manor, and playtesting "Lost City", I really feel comfortable in saying that. 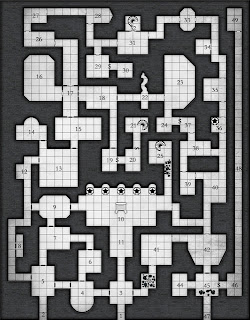 In the Temple of Elemental Evil (perhaps not a megadungeon, but a damn big one), there are a lot of good lessons regarding how different factions might work together or against one another. On the first dungeon level, you have a large group of gnolls. All of the gnolls rooms are connected, and if you encounter one group, odds are that the others will be alerted in kind of a domino effect, until all have joined the fight. 4e is GREAT at handling these kind of gradually-building encounters. 4e PCs have a lot of resources, and if you introduce creatures from nearby areas gradually during an encounter, you can really give it a "real" feel, as well as challenge your players. In "Lost City", a lot of the rooms of the pyramid are locked; the broken and open doors are towards the entrances of the pyramid, so rooms there are the most heavily populated. This is deliberate design; different creatures can hear a commotion if it happens.

I am reminded today on Gygax's birthday of what I consider the greatest set-piece encounter in the history of D&D: entering (or attempting to enter) The Forgotten Temple of Tharizdun. Gygax gives detailed instructions for adding reinforcements to the initial group of monsters encountered. They cover 25 ROUNDS and must include at least 100 creatures. The feel of a constantly growing combat encounter can give even jaded players a rush of adrenaline. If you are considering a 4e megadungeon, consider laying out some of the encounters in such as a way that they can 'blend'. I hesitate saying this adds 'realism', as realism isn't the point of a fantasy megadungeons; it does add a kind of logic to it though, a natural feel if you will, and the great thing about that is that it fits the 4e system like a glove.

By primarily emphasizing exploration, and by carefully considering encounter placement, you can create 4e megadungeons that work to the game system's strengths.
Posted by Jeremy "frothsof" Smith at 2:29 PM