The Hybrid Stat Block: No. Appearing

As I continue experimenting with ideas for a 0e/1e/4e "hybrid" stat block for my upcoming zine, 4e Forever, I thought I would share some of my thought process on its design in a series of blog posts. Today I want to give you a look at how I am bringing the classic statistic "No. Appearing" to 4e. 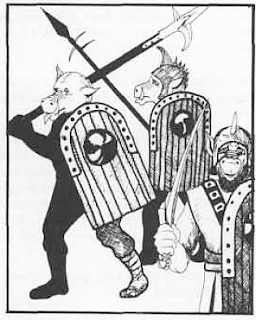 Before I get too in-depth, I will just say I have no real qualms with the post-MM3 stat block. It works great. It is brilliant design. This isn't a condemnation of it by any stretch, I'm just trying to provide an alternate version that is more in line with the early editions. The overall goals of the new stat block are to inject old-school feel into the presentation, streamline the information for DMs, and to help reinforce "fixes" to some 4e issues, such as encounter speed, level of difficulty, creature action recovery, etc.

Many aspects of 4e design are things of beauty. I love the logic of encounter balance and difficulty. 5 Standard monsters of the same level as a 5 PC party is an encounter of the PCs level. You can, to a closer degree than any other edition I have played, judge encounter difficulty in 4e. Even in the Epic Tier, with all its imbalances, the 4e method is still "closer" than using Hit Dice or Monstermarks (from old White Dwarf mags) ever were. But what if you crave greater randomness in the number of creatures encountered? You can always use Minions for very large monster groups, but Minions are not always the best solution. The problem is compounded by other factors. Many 4e PCs are not "trained" to flee; it just isn't in their vocabulary. Fights turn into slogs. Who even wants to use a random encounter when it is going to take up most of the session? And how can you use a variable amount of monsters and maintain a semblance of balance in the first place?

Well, the most important thing to do is to use Morale. I will not go back over the details here, but I will note that it is a crucial and effective tool to use to control encounter length. By having this variable built in to the game, you can afford to be looser with the number of creatures encountered, as encounters are typically shorter.

The second thing to do is determine monster levels and "No. Appearing". This sort of ties into another point about the monster design in 4e Forever: I am not using roles. Well, I am using Minions, Standards, Elites, Savages, and Solos, but not "Skirmishers", etc. I am trying to simplify encounter groups. Most encounters will be with creatures of the same exact type, i.e. 1d6+1 Giant Vultures. Though there will be some occasional variations, such as more than one type of Giant Ant, by and large you will be looking at the same creature. I hope you give it a chance when you see it. It allows you to really emphasize the flavor of monsters, and it is a lot easier for DMs to run; there aren't a lot of minor, irritating-to-track differences between say, a bunch of Orcs. Since the magazine deals with high Paragon and Epic, which is already taxing due to so many player options, it is a practical fix with old-school flavor, which is exactly what I am going for.

So that is enough philosophy, let's look at some examples of how to integrate variable encounter groups into your 4e game. Start by determining what you would like the average difficulty level of the possible encounters to be. For these examples, I am aiming for an average encounter level of the party's level +1. That is, if I roll and get the average number of possible creatures, it will result in an encounter of the party's level +1. You can easily adjust up or down to different encounter levels. Anyways, in these examples, I will assume a party of level 20 PCs, and I will be looking for an average encounter level of 21. There are two angles I can take to get there. I can start with a possible numerical range of creatures encountered, i.e. "No. Appearing", or I can start with creature level and go from there. Let's look at both ways.

For the first example, we will start from a numerical range of creatures, i.e. "No. Appearing". I decide I want a fairly large number of Standard creatures, 7-12 (1d6+6). The average there is 9.5 creatures, but always round the fractions of the "No. Appearing" average down; so, in this case I round down to 9. Assuming 5 PCs, I am looking at an XP target of 16,000 for a Level 21 encounter. So, I divide the XP amount by the average number of possible creatures (9). I get 1777 XP per monster, or Level 17 monsters. So the average encounter is about "9.5" Level 17 monsters. The potential encounter levels vary from Level 18 (with 7 Level 17 creatures) to close to Level 22 (with 12 Level 17 creatures). It should be clear by looking at this that the larger the static modifier in the "No. Appearing" roll, the more "stable" the range of possible encounter levels. If we instead take 2d8 creatures (9 creatures average), we still end up working with the same level of creature (17), but the encounter level range is from 11 (if they encounter only 2 Level 17 creatures) to 23 (if they encounter all 16 creatures).

Now let's look at starting with the monster level as opposed to "No. Appearing". I still want to hit my Level 21 target, but this time I decide on using Level 20 monsters. I take 16,000 (XP budget for a level 21) and divide it by the XP for a single Standard of 20th Level (2800). I get something like 5.7 creatures as our target number for the average number of creatures encountered. Unlike above, where we used the average of the possible "No. Appearing", the number of creatures here is rounded up to the nearest whole number, i.e. 6. So now, knowing what we want the average number of creatures encountered to be (6), we can decide on a "No. Appearing" expression. Let's try a "No. Appearing" of 1d10+1. Yes, this is actually a 6.5 creature average, but just as we did in the first example, we again round fractions of the "No. Appearing" average down; so, this expression gives us our target of 6 creatures. So, putting it all together, the mean (average) encounter is around Level 21 (6 Level 20 creatures, times 2800 XP apiece, divided by 5 PCs=3360, or a Level 21 encounter), while the low end (2 Level 20 creatures) is a Level 14 encounter, and the high end (11 Level 20 creatures) is a tough Level 24 encounter. That is a pretty big swing. I like it!

So that is my system, at least up to this point. I can anticipate providing another statistic that notes the possible encounter level range of a "No. Appearing" roll for monsters for a group of 5 PCs. Something like "Enc Lvl: 9-12; 11 avg". We'll see; I am open to ideas!

If you end up rolling a low number of creatures, hey it was a quick combat. If you roll up a lot, there is still a good chance the encounter will end quickly thanks to Morale (although the PCs may get severely roughed up). Now, if you are wanting to deal with a huge amount of monsters, say 20+, you will likely want to look at using Minions, or combinations of Minions and other monsters. There is a level-imposed limit to the accuracy of PCs and monsters, and if you go too far in either direction then it will become too easy or too hard to hit each other. Anyway, if it all works as planned (and playtesting has been positive), encounter length won't be a waking nightmare anymore. You can also help PCs mitigate some of the swingier difficulty with henchmen, which the magazine assumes are being used.

And that's how I am using "No. Appearing" on the stat block. This is made possible by Morale, adjusting monster levels, and using henchmen. When you put it all together, it is an attempt to use "No. Appearing" to bring old-school flavor to 4e stat block, loosen the balance a bit, and shorten encounter time. I hope I did a good job explaining it! I have tried to rephrase it several times for clarity.

I am interested in thoughts and opinions so please leave a post! I will be back soon with Part 2. I also want to say thanks to Dndblogs for including my site! It is a very cool group of 4e blogs to follow. I check it out daily, so take a look if you have never seen it before.