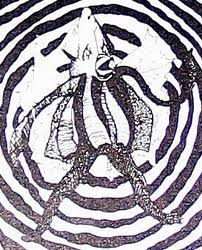 So I thought I would point out a couple of bits of "Errata". I have edited some posts based on ongoing playtesting. These are mostly minor changes but I wanted to point it out to anyone using or getting ready to use the rules.

-Henchmen are now attracted to PCs starting at level 8 (as opposed to 6), and never total in number to more than a quarter of the PC's level. This used to be 1/3.

-I have edited the Reaction Tables. The chance of a monster being initially unfriendly or hostile has increased slightly.

-The biggest changes have been to the Giant Crab preview. The grab still does not allow for escape attempts, but it now automatically ends at the end of the Crab's next turn. Of course, this means it has a chance to continually "refresh" the grab, but for some PCs, particularly those with high Reflex scores, the possibility of escape is there. I have also lowered the damage expressions slightly based on the number of these it will be possible to encounter. The AC was lowered to the standard number for its level, and its attack bonus verses grabbed creatures was lowered. It is still very nasty, but it did get "nerfed".

-I have added some extra information to the No. Appearing post, providing information on the formulas being used to balance the random numbers of creatures encountered.