We continue our look at the 4e Forever monster stat block today with some changes I am making to hit points. We are not going back to hit dice, so don't panic. The basic concept of hit points isn't changing, and they are still listed just like they are on the 4e stat block. However, the formula for calculating monster hit points has changed.

Recently, I posted about how I am experimenting with different ways to derive certain statistics. It is a push towards simplicity. I have also mentioned a few times that many of the encounters in my upcoming project are with variable numbers of the same monster, much like the wandering monster tables of yesteryear. Partly because of this, I have dropped some of the roles from monsters. I retain Minion, Solo, Standard, Elite, and Savage, but drop the rest. It isn't that roles are bad, they just really didn't fit my project mechanically or aesthetically. In the process, I had finally realized the obvious: the way 4e does hit points is really annoying. 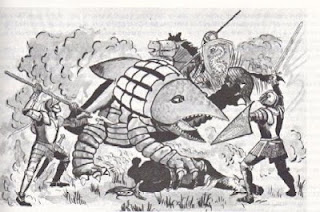 4e has different formulas for different types of monsters. This makes perfect sense for Solos, Minions, Standards, and Elites, because these categories are based on the overall ratios of hit points. However, Brutes, Skirmishers, and the rest have hit points based more on flavor. Weak little Artillery guy in the periphery of the fight? Fewer hit points. Big tough Soldier? More hit points. Makes sense. It also makes it a nightmare to calculate hit points. Heck, I'm not even giving Constitution scores to monsters in the first place!

It was with all of these things in mind that I came up with the formula for hit points. Overall, it gives monsters a tad fewer hit points. Of the 4e monster roles, only Lurkers and Artillery would average fewer. Everything ends up about "Controller" level. It isn't a huge difference, but I do think that this will still help a titch with combat speed at high levels (something I have gone to great lengths in this project to address). The early playtesting has shown that the monster difficulty will not suffer as a result. But the most important thing is that it's easy. That's the real point of it. With this formula, you do not even need to look in the DMG (or whatever source you use).

The 4e Forever formula for a Standard monster's hit points is (Level x 8) + 20. Elites and Savages have twice that. Solos vary and can have 4 to 5 times the hit points of a Standard. Minions of course have 1 hit point.

Check it out the next time you are making monsters. The slightly lower hit points should help a touch with slow combat, and they are a lot easier to calculate. Leave a post and let me know what you think!
Posted by Jeremy "frothsof" Smith at 9:52 PM