So a while back I put up a post (HERE) about bringing elements of the Call of Cthulhu RPG into D&D. After playing some CoC over Halloween, I have been meditating on the game frequently, and while it is undoubtedly a masterpiece, there are some ideas I have been thinking about borrowing from D&D in the future. I thought I would share my thoughts (note that I am still "playtesting" these). 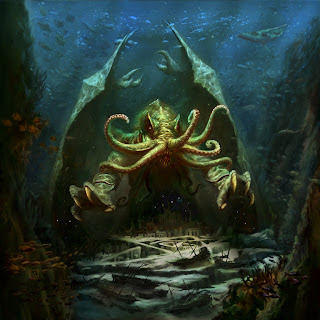 So my first idea has to do with what I have always felt were "wonky" Investigator (I) skills: Idea, Know, and Luck. These just always felt a little strange and unnatural. Anyway, I was thinking about how classic D&D handled certain Thief skills. While the Thief would roll to see if he could do things like Climb Walls, where there was no mystery in the outcome, other skills such as Move Silently would be rolled for by the DM. The Thief would always assume he was successful...at least at first. I also thought about DMs rolling to check if PCs notice hidden doors. So this all gave me the idea of having the Keeper (K) roll the aforementioned skills as "hidden" checks for the party. In other words, as passive checks. The flavor of these skills seems to back this up really well, and it feels much more natural to me. The K can just roll once for the entire party, using the party's highest score for each skill. So, if nobody finds that clue at the library, the K might roll a Know check. If they are stuck with no leads, an Idea check. If they are completely screwed, a Luck check. The K can of course choose not to roll any of these at all if the Is haven't "earned" it. These skills are, after, all, CoC's version of get-out-of-jail-free cards.

My other ideas have to do with combat and initiative. Now, CoC is a dangerous game with a lot of attrition. Your Is are not going to want to find themselves rolling initiative all the time like in a dungeon crawl. Still, my table has seen enough combat to make me notice how much I dislike how CoC handles the initiative order and flow of a combat round.

For starters, basic CoC rounds always go in order of DEX. You don't roll. Its always just by DEX. I like a little bit more variety than that. I don't want it to be as swingy as say 4e, where you roll a d20 plus mods, but I would like it to be possible for there to be a little variety. So, the idea I came up with is to roll a d6 and add a modifier based off of the DEX score. Here is the table:

Now, before I talk about the rest of my ideas, let me just say that I usually play 1910s-30s. These rules may not work very well with modern guns, etc, without a little tweaking regarding rates of fire. For brand new players I usually just let the party choose between a revolver, rifle, or shotgun and roll from there, rather than make it too complicated, as you can really go crazy with gear in CoC. Anyways, these rules assume rates of fire of up to 3 shots with pistols, and 1 or 2 from rifles and shotguns. 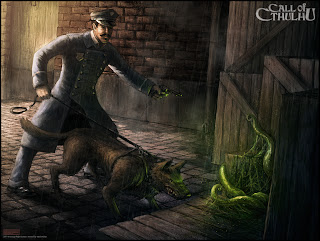 So CoC rounds of combat are kind of messy and not very intuitive. A pistol might shoot once in DEX before the regular combat round, and depending on the rate of fire again later at half-DEX. You can tell that they were maybe trying to spread out the gunfire for a little balance, but it ends up just feeling kind of weird. I propose one single round of combat, influenced partly by 2e D&D. Basically, on your turn, you can fire at your max rate of fire without moving OR move your speed and attack at half of your rate of fire (minimum 1 shot, rounded down). So a pistol that can fire 3 shots per round can fire 3 shots if you remain still, or you might move and get one shot off. This way you don't have to hassle with multiple rounds, but there is the built-in penalty of movement restriction to balance the possible increase in firepower. Combat is already deadly enough, so this doesn't strike me as increasing the lethality very significantly at all. It just makes the game run more smoothly.

Other combat skills are somewhat unclear, especially for new players. These are the Dodge, Parry, and Grapple skills. By using some rules similar to those of 4th edition D&D, you can more easily explain these to players, as well as actually improve how they work in the game. First of all, if someone or something attempts to Grapple another creature on its turn, the target can immediately make a STR vs STR roll as "free action". In other words, the roll does not count against their following turn's actions in any way. It just happens right then and there as a response to the Grapple attempt. If it fails, the Grappler immediately moves on to whatever he can do based on the Grapple (i.e. hold them in place, whatever). Dodge and Parry are somewhat akin to 4e's "immediate interrupts", only they can both happen within the same round. However, you cannot attack and use either of them in the same round. This requires you too look at rounds refreshing in a manner somewhat akin to how 4e handles immediate actions. You no longer need to declare any intent to Parry. If you are attacked, and the attack can be parried, you can attempt to Parry it then and there. However, now you cannot attack on your following turn. You can still move on your turn, but you cannot attack or cast a spell. If you have parried and then, prior to your next turn, have a chance to Dodge an attack, you can do so, but this forfeits your movement on your turn. So, if you have both parried and dodged prior to your next turn, you can't really do much but speak or get something out of a bag, whatever.

This might all sound more complicated than it is. I will try to give an example of a combat round to tie everything together. We have two characters, the Doctor (DEX 11) and the Cop (DEX 15), squaring off against a sentient fungus (DEX 5) and vomitous snake-thing (DEX 22). The Doctor has a double-barreled shotgun, while the Cop has a revolver with a rate of fire of 3 shots per round. They roll initiative. The Doctor rolls a 1 and ends up at 3. The fungus rolls a 4, so even with a lower DEX, outpaces the Doc at 4. The Cop rolls a 5 for a total of 9, and the snake-thing doesn't bother rolling; it just goes at 22. The snake-thing immediately tries to eat the Doc. The Doc tells the K he wants to try and Parry the thing's bite by holding his shotgun sideways up into his mouth. Miraculously the roll is successful, although now the Doc cannot attack on his following turn. Next up is the Cop, who stands still and starts just emptying his revolver at the snake-thing, firing three shots all on his same turn. The fungus is now up, and spits some kind of gross spore-goo at the Doc. Even though the Doc has already parried this round, he can still attempt to Dodge, so he rolls to try and Dodge the spew. Again he succeeds, against all odds. The only trouble is, now he cannot move or attack on his next turn. Which is unfortunate, as it is now his turn. He just stands still, whimpering softly. We are now back to the top of the order. The snake-thing attempts to Grapple the Doc in order to suck his brains out of his eyes. The Doc gets to make a STR vs STR roll as a "free action" in response to this. Sadly, his luck has run out, and his brains are sucked out of his eyes. It is now the Cop's turn. He wisely decides to flee, still managing to get one shot off as he dives out of the window.

I am very interested in input about these ideas and/or houserules you use in your CoC games, so feel free to share!

Email ThisBlogThis!Share to TwitterShare to FacebookShare to Pinterest
Labels: 4e, Call of Cthulhu, Dungeons and Dragons