Curse of the Crab Spider! 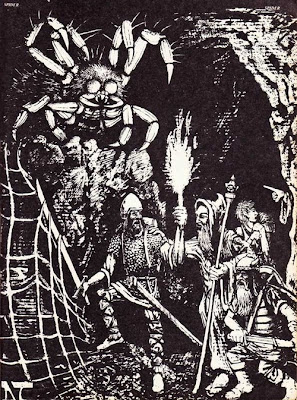 The Crab Spider is a cruel monster. Appearing in Moldvay's Basic D&D rule set, this spider is both stealthy (surprises on a 4 in 6) and poisonous. It has a twist though: the poison does not kill instantly; rather, it is lethal after 1d4 turns. I assume that this delay is to somewhat "soften" the creature and allow for at least the possibility of magic items or spells offsetting the poison. I imagine that many DMs might say something like, "You can feel the poison coursing through your bloodstream, and you know that if you aren't treated soon that you will die." However, as I was pondering this creature, I found myself inspired to look at it another way. The delayed effect of the poison doesn't have to play out in such a straightforward manner. The DM could in fact just continue the game without saying anything, then about 20 or 30 minutes down the line, after the encounter is pretty much forgotten, get a grave look on his face and say something like, "Uh, Doug. You are noticing that your leg is swollen AS ALL HELL where that spider bit you. You are also feeling a little confused...dizzy...you stumble...save vs poison." It is much more terrifying for the PC to be unprepared, thinking that everything is ok, and then have the bite come back to haunt them. That got me thinking...

Delayed effects. That is what I want to talk about today. Delayed effects are a great way to add twists to your game and to horrify your players. There are all kinds of ways you can use them. Here are a few ideas I came up with.

Poison: Well, the aforementioned Crab Spider gives us a good example of delayed poison use. Lets think of another. What if the party are guests at some banquet? Everything goes swimmingly and it is a lovely evening. A few hours later, back at the inn, they all start projectile vomiting, developing visibly dark, swollen lymph nodes. They were poisoned at dinner and didn't realize it. What do they do now?

Diseases: In my experience, both as a player and DM, diseases make for great, memorable roleplay opportunities. Maybe they get into a fight in a tropical clime, and their open wounds allow for some kind of parasitical infection that doesn't manifest itself for a week. Maybe they pick up something passing through a town, developing a fever weeks later. Confuse them as to where they contracted the disease. Diseases also need not be lethal. They could just make for fun scenarios. Maybe they catch a severe cold and every time they interact with NPCs, you cue them to sneeze. With no handkerchief.

Curses: You could have some old woman in a marketplace curse the party, a la Drag Me to Hell. Weeks later, strange things start happening. Only through the help of a sage do they even recall the curse. Savor the look on their face when it dawns on them.

Bodily Transformation: A scratch from an undead creature could set off a metamorphosis, like something from The Fly. Again, let weeks of game time go by, then maybe an affected PC starts losing his or her hair, or has a fingernail come off really easily. Trying to figure out the cause of the symptoms becomes an adventure in itself. 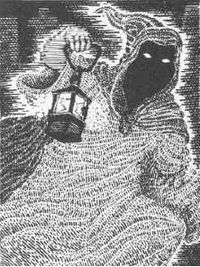 Hauntings: I like this idea a lot. The PCs kill someone or something, perhaps accidentally. Days later they maybe dream about it, then start seeing it while they are awake. Others cannot see it. This would be fun with like spooky, freaky little Goblin children or something.


These are just a few random ideas, but I hope they get your wheels turning. Delayed effects such as these can really add another dimension of horror to a game, serve as adventure seeds, and/or simply encourage some fun, often hilarious roleplay. I am curious to hear if any of you out there have used similar delayed effects in your games. If so, leave a post!
Posted by Jeremy "frothsof" Smith at 2:53 PM