Getting Buckwild with Alternative and "Unbalanced" Rewards

I am not obsessed with game balance. There is a very good reason for this. I am the DM. I am the balance. Sure, it helps to have a system that isn't completely bonkers, but at the end of the day, I can easily shift the difficulty wherever I like. As readers of my blog know, I am that apparently rare breed of D&D player that actually likes both classic editions and 4e. There are said to be like five of us in existence. Anyhoo, when I got back into running old school D&D, one of the things that really stood out were the old magic items. No, I am not going to give one of those sermons about how perfect the magic item systems were in the old days, and how 4e ruined everything, because you can go read that crap 24/7 on any given RPG forum yourself. What stood out was just the power level of the items. There are indeed some items which can quickly change the dynamics of the game. In the 1e DMG, Gygax rightly emphasized being careful with powerful items. 4e basically tried to build fail-safes into the system to do this for you. 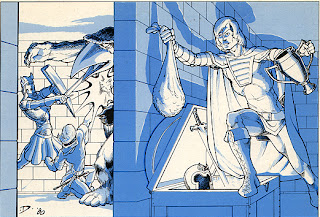 Recently I ran a Tegel Manor conversion for 4e. It was awesome fun. One of the cool things to discover was just how wacky and off-the-wall the game was sometimes played in the old days. Nearly every room had my players going "What?". There were Dwarves in disguise that were actually Type IV Demons. Preposterous ecology as far as the eye could see. And perhaps most delicious: unbalanced and wacky magic items and rewards. Lots of them.

Now, I preface this by saying that 4e does have some powerful items. For example, many rituals can be used in creative and strange ways, and given total freedom with them, players can indeed warp the game. How dearly I would love for this to happen. Every 4e game I run, I give out rituals. And every 4e game I run, they are rarely if ever used. I have spoken a bit about it before, and there is no one thing to blame for this, but it is a combination of their cost, both real and perceived, as well as a shift in game play in 4e, which is (in my opinion) primarily due to the god-awful, horrendous "adventures" that Wizards put out for it. This is not true for every table mind you, but the published material has consistently reinforced a certain adventure model for 4e, a "fight anything and screw creativity" mentality that would have guaranteed your guts spilled back in the day. Hell, its so bad that all you can do is sympathize when you see play reports like this one at Dungeon's Master, where the players literally don't know how to explore anymore. Kind of chilling. But I digress.

In Tegel Manor, the powerful items and rewards teach a simple lesson. Sometimes what you find is good for you, and sometimes it is very bad for you. And sometimes this is all determined on a completely random basis. So, today I want to show you some example items and rewards from the adventure, along with a tidbit of philosophy to help you use these kind of things in your 4e game.

-Tegel Manor has 100 different paintings hanging on the walls; they are spread out among the 200+ rooms. Each painting is of a former resident. Each painting has a random effect when a PC looks at it. Some are good, some are bad. PCs learn this rather quickly, and then make their own choice as to whether to look at them or not. One player got lucky over and over, and by the time the adventure was done, he had gotten a +2 to raw Constitution, as well as a +1 to Dexterity. Permanently. Now I can feel 4e DMs flinching already as I type that, but is it really that overpowered? No. It feels awesome to the player though. So awesome in fact, that other PCs wanted to look at the paintings too. Sadly, things didn't go so well for some of them. Some lost permanent Charisma points, others were teleported to far-flung reaches of the manor to fend for themselves.

The lesson: it is fun for items or rewards to have a random element; if the possible benefit appears great enough, PCs will risk it all for it. And when that happens, fun ensues.

-Some of the effects of traps, tricks, paintings, etc in Tegel Manor are strictly "roleplay" rewards and penalties. For example, a trap blows dust in a PCs face, and the PC is now unusually brave for 2d12 turns, or is drunk for 3 hours, or is incredibly itchy for 30 minutes. This kind of stuff was great fun with my group; they bought right into it, and played along. It was probably the hardest we ever laughed in a game session. Silly? Yes. Fun? Yes.

The lesson: try non-tangible rewards and penalties that do not have a mechanical benefit or downside, but that instead affect a PCs mood, appearance, state of mind, etc. Players come out of their shells a bit and have a good time.

-In one room, a hooded skeleton with a red skull stood menacingly, giving the party a cold stare. It looked like something you would not want to mess with. One player, the Paladin, went and talked to it. Turns out that "Red Skull" just offered him a Wish, then sprouted wings and flew away. The Paladin thought about it, and wished for the ability to teleport. I just made up an Encounter power on the fly and Voila, the player got a cool new teleportation power, all because he risked something to get it.

There are several lessons here: One, the DM always has control, no matter what. If the player had wished for something that I didn't want in my game, I could easily morph it into whatever I felt comfortable with. Two, reward players that take major risks. Three, don't be afraid to make up rewards on the fly that aren't in the rulebook.

-One room had a very silly item. The room was a gardener's shed, and so there were garden tools and the like, as well as a powder with an odd property. Anything you sprinkle with it turns green. Permanently. Now, this is obviously a very zany item. It is also an item that has no obvious positive or negative effect on the PCs. It just is. Well, long story short, the party Dwarf has a pet bear, so he gave the bear a green mohawk. They still have the rest of the powder. There are lots of possible uses for it, given the right circumstances. Maybe one day they will use it again.

The lesson: not every item they find has to have an obvious mechanical benefit or penalty. Sometimes its just...weird or unusual. It might never get used, or it might be there at the perfect time. 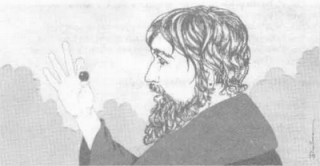 I could honestly keep going, but I think my point has been made. Be a confident DM. You have control over your game. You can afford to let yourself go a little bit with alternative, "unbalanced", and frankly silly rewards and penalties; it is fun for the DM and the players.

I would love to hear your experiences with this sort of thing! Leave a post! And have a great weekend!