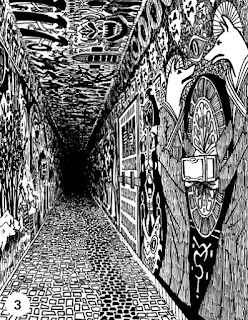 **PLEASE NOTE, THE FINAL TRAP RULES APPEAR IN ISSUE ONE OF 4E FOREVER, AVAILABLE NOW FOR A FREE DOWNLOAD**

My upcoming 4e Forever fanzine uses the following rules for traps. A trap has a trigger and an effect. A trap's triggered effect always behaves as an Opportunity Action unless otherwise noted. Most triggered traps do not make attack rolls; instead, a PC is usually required to make a saving throw to avoid a trap's effects. It is (hopefully) more dramatic and exciting for the player to roll to save, rather than watch the DM roll to attack.


PCs trained in applicable Skills might be given small bonuses to their saving throws. Since 4e saving throws stay the same regardless of a PC's level, a single trap can now threaten PCs over multiple tiers of play. In addition, trap damage no longer scales. The damage simply is what it is. Traps are not assigned levels, and, as the traps typically do not attack, they no longer require constantly increasing attack bonuses that have historically lead to “trap bloat”.


For example, while a falling stone block is lethal to low-level PCs, it can still pack a wallop against high-level PCs. A falling block trap does 50 points of damage. This will flat-out crush a 1st Level character, and still dent the hell out of an Epic suit of armor. PCs that are trained in Acrobatics might get a small bonus to their save, representing an increased chance to dodge the block.

The relative damage totals for different traps are assigned based on a rough comparison of their deadliness. So while a scything blade might do less damage than a falling two-ton block, a strong poison gas might just kill you outright, regardless of your hit points or armor.

Traps are presented in simple terms, with a brief description of the trap and what it does, along with a trigger and effect. The size of a trapped area, or the number of trapped squares, is left for to the DM to decide unless otherwise noted. Specific Skill(s) that can be used to detect or disable traps are provided at the beginning of a trap's listing. The DCs to detect and/or disable traps are always the Hard DCs of a PCs level. This is the only way in which traps “scale”. In game terms, this is kind of required based on the way 4e is built, but in terms of flavor, I think it is well-supported as well. As PCs gain levels, they are in increasingly dangerous situations, facing more formidable foes. Maybe if a 25th Level PC went back to the first little dungeon he ever cleared, the DCs would be lower; however,  the pitiful treasure would not even be worth taking. Similarly, if some 2nd Level scrubs were unlucky enough to happen upon an Arch-Lich's tower...lets just say they would be dead before they crossed the threshold.

Falling Block Trap
Stepping onto the floor released a massive stone block from overhead, crushing the Elf.
-Detect: Dungeoneering
-Disable: Dungeoneering or Thievery
-Trigger: A creature enters a trapped square.
-Effect: The creature must roll a saving throw. Creatures trained in Acrobatics receive a +2 bonus to the roll, representing an increased chance to dodge. On a failed save the creature takes 50 damage.


I hope you like these ideas! Many more traps will be provided in my upcoming fanzine!
Posted by Jeremy "frothsof" Smith at 12:58 PM