Today we look at adding one of my favorite old-school mechanics, the Claw/Claw/Bite, into 4e. In 4e, monsters flat out need multi-attacks to be able to threaten PCs, especially at high levels. Using a Claw/Claw/Bite attack is a perfect way to inject old-school flavor into your game while simultaneously helping to fix 4e game balance.

I am working with the Claw/Claw/Bite 'attack routine' in my fanzine and 4e campaigns. I thought I would share some ideas on how I have been using it. As mentioned above, the Claw/Claw/Bite helps solve some 4e issues. If a monster is dazed, using Claw/Claw/Bite as a single standard action helps a monster with action recovery. It also helps monsters do more damage since they end up with a better chance to hit. Both good things. 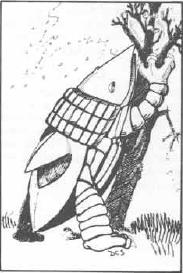 Claw/Claw/Bite attacks allow lots of room for DM creativity. I have used multiple variations. For example, the bite could be contingent on at least one claw having hit. So if you don't hit with a claw, there is no bite. OR if you hit with at least one claw, the bite always hits and does automatic damage. Maybe if you hit with a claw, the bite does extra damage if it hits. Or if all three attacks hit, the target is stunned. You can have both claws target one defense, with the bite attack targeting another for flavor. Maybe it isn't even Claw/Claw/Bite...maybe it is Punch/Punch/Headbutt! There is a lot of variety within the 'simple' Claw/Claw/Bite sequence that might not be immediately apparent, but if you work with it for a bit, you find that it opens up a lot of room for flavorful design.


A Claw/Claw/Bite goes GREAT with "Savage" monsters. Like butter. It is very easy to DM a monster that uses a Claw/Claw/Bite as its primary attack; this in turn helps the game play faster, helping address another 4e issue, namely combat speed.

Anybody else utilizing the Claw/Claw/Bite attack routine in 4e? Leave a post!
Posted by Jeremy "frothsof" Smith at 10:33 AM