For some players and DMs, the absence of rules is a problem. OD&D is seen as lacking "options". If something is not explained in the rule book, it is as if it can't be done. This is far from the truth of course; in fact, what rules ARE there are merely guidelines in the first place. Still, for a player or DM coming from a more modern iteration of the game, there is a bit of culture shock looking down at your character sheet. For some DMs, on-the-fly rulings and improvisation can be a bit daunting. This isn't strictly a modern problem; even in the OSR, you sometimes will see someone opine for decent grappling rules, and it is well-documented that Gygax and Arneson got numerous inquiries for "rules clarifications" in the earliest days of the game. This post is to throw a few ideas out there for players and DMs that need a little coaxing and reassurance to ditch the rule straitjacket. I realize the irony of doing so; in a way I am adding rules myself.

Combat maneuvers and skills have become more and more codified over time, reaching their pinnacles in modern editions. I am not trying to teach a history lesson here, so I leave it to the reader to chart the different permutations. The end result of it is that not only has the game developed lists of specific things you can try, it has also dictated the effects. This has hardwired a lot of notions into DMs and players. Take a look at this character sheet, noting the complete absence of modern trappings. 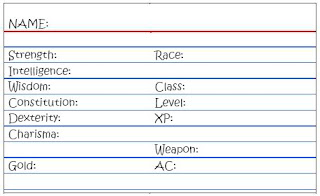 From a DM standpoint, be open. Allow players to be creative.

This still leaves the question as to how to adjudicate rulings. Try these simple ideas.

1. The better the related ability score, the better chance to succeed.

2. Depending on the ability scores, a task might be automatic or impossible. It is up to you to decide when a chance of success or failure even exists.

Pip was so weak that he struggled to swim against even the slightest undercurrent.

3. When attempting a special maneuver that involves attacking another creature or object, use the AC as the base target number and the degree of success or failure to determine the outcome.

Larry wants his fighter to trip an opponent. Larry beats the target AC by enough that the DM decides he has succeeded.

4. When attempting a "skill", roll under the most closely associated ability score. Modify based on the situation if needed and use degrees of success or failure to determine the outcome.

Hilda tries to balance on the thin edge of the cliff. The howling winds make it more difficult. Hilda rolls a 2, well under her dexterity score, even modified for the wind. She makes it look easy.

5. Have fun with crits and fumbles.

Joan stood before the council, encouraging them to join the cause. Unfortunately, the player rolls a 1, and just as she opens her mouth to speak, Joan farts.

Note that I have not listed any hard and fast modifier charts, or spelled out any degrees of success. I leave this to the DM. I personally suggest doing this based entirely on feel.

I am not sure how helpful this is. For experienced DMs of OD&D, you probably have had your own system for a long while, perhaps decades, and I am not telling you anything you do not already know. I do hope that for anyone reading this that has never tried OD&D and was either curious or biased about it, that it might have some use. A lot of it might seem like common sense, but the main idea I want to get across is that the perceived "lack of options" is a feature, not a bug.