Inspired by The Other Side's series reading White Dwarf, and Grognardia's old Imagine mag posts, I wanted to do a "Let's Read....Something" series. I settled on Polyhedron, primarily because the issues were so short that it seemed like I might actually have time to keep up with it.

This of course was the RPGA newsletter. I completely missed out on the RPGA back in the day. I was aware it existed from Dragon mags, and it seemed like it would have been cool to be a member, but I was a broke kid and didn't really have the wherewithal to do anything about it. Years later I got to rediscover the newsletters, and there is a lot of cool stuff to be found in them. 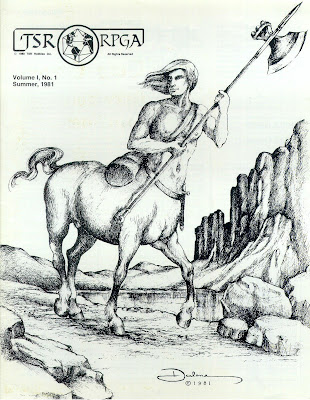 It had actually not yet been given the name Polyhedron when the first issue came out in the summer of 1981. The first thing you notice is that awesome, familiar art style of Darlene, she of amazing-Greyhawk-map fame and the talent behind many other iconic illustrations, such as this one from the 1e DMG. 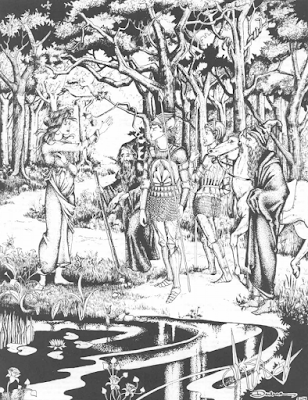 Inside, we begin with a hello from editor Frank Mentzer and the beginnings of the letters section.

Next is Dispel Confusion, a regular feature not unlike Sage Advice that clears up various rules questions. Firm rulings were actually crucial to the whole notion of RPGA play, something that seems familiar today to participants in Pathfinder Society or the Adventurer's League. Nothing too revolutionary here: questions on max/min MU spells due to intelligence, humanoid armor, paladins and lycanthropy (they can be affected as it is both a curse and a disease), and the weight of magical armor.

Then comes part one of a fascinating interview with Gygax. This is smack-dab in his ultra-fiesty period, which found him berating game reviewers and designers in Dragon and lashing out at houserulers everywhere. I love Gygax. I never knew him, and can't really pretend to understand his motivations, but it always feels to me when I read interviews with him from around this time that he just wasn't that happy. I don't mean clinically depressed or anything. I just think the incredibly rapid, massive success of the game would be a lot for anyone to handle. Being a CEO of a multi-million dollar company all of sudden and trying to adjust to being a "businessman" can't have been especially easy. One would also have to be pretty damn self-actualized for all of that success not to effect their ego as well. You often see him say things about how little time he had to write or play games, and his tone had sharpened considerably from the hippy free-for-all philosophy of the LBBs. So here we get quotes like, "One of the reasons I was able to [focus on AD&D design]...is that I felt that a game was needed that would have more control over its audience, and one that was going to have more uniformity of play." This, of course, fits with the RPGA perfectly. The interviewer (Mentzer?) also notes that Gygax gets "testy" during the end of the interview, and that he will have to come back for a part two. Anyway, I am not making a judgment about the man. I love him and am thankful for him every day. His attitude made for some great reading around this time, so I am not complaining.

We move on to a list of Boot Hill stats for western movie and TV stars. Clint Eastwood's stats come out on top. I think I have seen this same list in Dragon; can't be sure. Pretty cool though.

Notes for the Dungeon Master is next, a regular feature, this particular one containing little trick and trap tidbits for DMs. Nothing too inspired, save for the idea of a henchman who gets a case of the hiccups in times of stress.

There is a preview/review/advertisement for Fight in the Skies, a game I have never seen nor played, and do not expect to any time soon, so I skipped it.

There is a roundup blurb about that year's GenCon South (held in Jacksonville, FL) tournament results. A highlight was said to be a game on the "world's largest sand table": the beach! Apparently they played a large outdoor game of Tractics. That would have been cool. 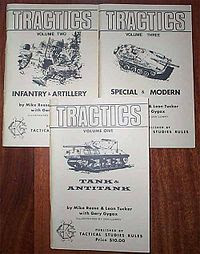 Next, Jim Ward provides a little insight into the thought process of the design of Gamma World. It is interesting. He addresses questions he gets about the game, plugs Legion of Gold, and mentions that he is currently working on a Metamorphosis Alpha rewrite. 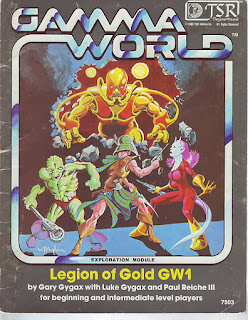 The issue ends with a Tom Wham comic, Rocksnoz in the Land of Nidd. You can't help but get nostalgic seeing his familiar, zany drawing style. Yes! I got to use the word zany!