The Art of the 4e Sandbox

Hello all. I thought I would post some thoughts and ideas about running sandbox campaigns with 4e D&D. This is not a comprehensive guide by any stretch, although I do hope it gets some of your wheels turning.

Classic editions of the game have an embarrassment of riches to aid sandbox play. Armed with my Greyhawk box, the 1e DMG, and some old Judges Guild stuff, I am basically impervious to my players' wildest choices, able to react and flow with virtually anything that can be imagined. It is possible to reach this state of samadhi with 4e, but there are a few tips that might help you get there a little more quickly.

First off, if you don't want to run a sandbox style game, I am not judging you. If you have the next 10 levels planned out, more power to you. It isn't for everyone. I personally love it, as it helps me hone my improvisational skills, gives players the feeling that they are in control, and makes for completely unexpected awesomeness. But is it a contradiction in some ways? Can 4e, with its carefully planned and balanced set-piece encounters thrive in an inherently unpredictable environment? Yes, yes it can. 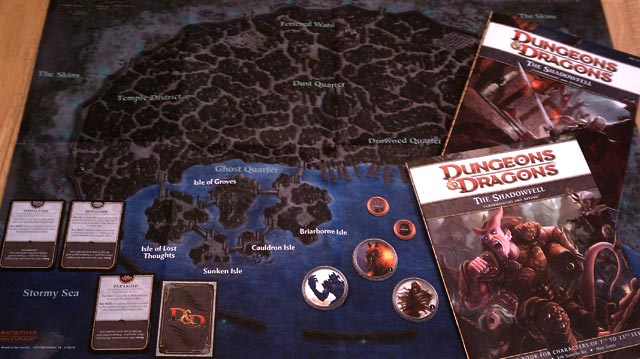 So the first thing to ponder is the environment, the world, the sandbox. Despite some poor adventures, 4e did manage to release some great products over its run, and the best of these are actually suited to sandbox play. Vor Rukoth, Hammerfast, Gloomwrought...these are all very strong products that are not adventures; instead they lay out large areas, delineating the factions that inhabit them, providing seeds for DMs to make their own adventures. They also include unique monster stats and some flavorful items. So how do you take these products and make a sandbox out of them? There are three basic steps that I would suggest. Think up some different mini-adventures or encounters that can take place at various locations. Don't overdo it, as many may never be used. Utilize the provided hooks and histories (or make up your own) to make the area live and breathe. Finally, design some random encounter tables that fit the area. 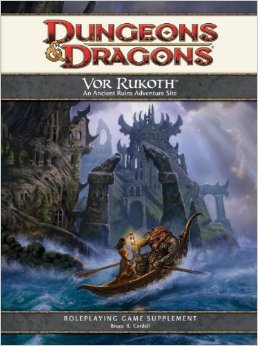 In my Gloomwrought game, I used the text to influence my encounter tables. You have a religious district, so I had some encounter tables that reflected this; different groups of monks and clerics might be encountered. In the seedy district, they might encounter more Humanoids and bandits. Skim the lists of monsters in the back of the various monster books and put together some ideas. It doesn't matter what level the monsters are, what matters is the flavor. Do they back up the "feel" of the area? Your PCs need not FIGHT everything they encounter; in a lot of ways, random tables just help reinforce their surroundings. Experiment with widely varying group sizes of creatures encountered. No party is scared of two or three bandits, 30 however, and you might give them pause. You might find this article helpful in the process of setting up varying totals of wandering monsters in 4e.

I also looked at different areas throughout Gloomwrought and prepared loose little "mini adventures" in different locales. The cemetery is rumored to be haunted. Nobles need bodyguards for sketchy areas. Lizardfolk have infested a sewer. Populate your map with little hooks, and let players be drawn where they may.

Finally, I slowly disseminated lore. The more the PCs explored, the more they became privy to the various power struggles and histories of the city. While they might have never even acted on any of the information, it served the purpose of bringing the area to life. That feeling that things are happening outside of the PCs; the city is alive.

If you want something less scripted and sculpted, try the Chaos Scar. Get yourself a list of the Chaos Scar adventures from the most recent Dungeon index, make up a few landmarks and random tables, and let the players go where they may. For the especially adventurous, simply offer your players a hex map of the Nentir Vale and just let them roam. Use published modules and products like Threats to the Nentir Vale to populate random tables and come up with adventure hooks. Again, the Dungeon index is your friend. Of course, you can always make up your own world; many DMs do. My overall advice for approaching it would still be the same.

Fly in the face of 4e conventions. Find ways to emphasize the passage of time. Don't hand-wave travel. In sandbox play, the travel often IS the adventure. Challenge yourself with random weather tables, scarce food or water, odd geological formulations, and bizarre encounters. If you need to make up a monster on the fly, consider these tips for quick 4e monster creation.

To experienced DMs, a lot of this probably sounds old hat, while to others, you may have never thought of running a 4e game this way. I personally think running 4e in a sandbox style can be one of the most rewarding experiences you can have with the game system; unfortunately, you just don't have as much of the work done for you like you did in previous editions. By utilizing suitable 4e products and settings, populating some areas with adventure hooks and mini-scenarios, and designing flavorful random encounter tables, you can quickly set the stage for hours and hours of sandbox play.

I know a lot of you 4ers out there have done some of this before, so leave a post and let me know how sandbox play has worked for your 4e game!
Posted by Jeremy "frothsof" Smith at 9:37 PM