An Adverse Reaction to Immediate Actions

Yeah...sorry about that. There's a clever title there somewhere but I missed it badly.

Well, first of all, happy new year to you. My resolution is to be more prolific this year, so it is fitting that I am putting up a post today.

Complaints about immediate actions affecting combat speed are not new to 4e gamers. I realize that some people will have different experiences than my own. All I can tell you is I have run games for hundreds of folks and I have played under dozens of DMs of all levels of experience with 4e, and OVERALL, immediate actions have posed a problem. 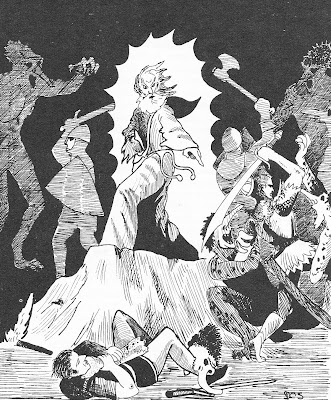 Now let me say that I see the value in having some actions act as interrupts and reactions. After all, like many seemingly "modern" 4e conventions, these mechanics actually have their origins in the classic editions. Familiar spells such as Feather Fall operate something like immediate actions. So they have precedence. They can also add a cool cinematic element to some situations. That said, you only really have to sit through one 4e combat encounter that is filled with endless immediate actions to recognize they are a problem.

Complicating matters, many 4e classes partially rely on immediate actions for their very identities in combat. In particular, Defenders rely on mark punishments to enforce their role; these are often immediate actions. And lets not lose sight of the fact that these abilities are FUN for the player playing the Defender. Some of my favorite moments in 4e combat involve my Fighter/Monk dancing through combat, marking everything she attacks, hit or miss, then daring them to ignore her mark. I have to believe that there can be a place for these kind of mechanics without completely slowing everything to a snail's pace.

So it isn't as easy as just flat-out banning immediate actions. They are cool, and they are woven into the game. I propose the following houserules to limit them. Like any houserule, I would talk to your players about it prior to PC creation.

1. THE BASIC RULE: Allow immediate actions from utility powers, class features, and/or theme powers only. This allows for Defenders to still defend, for iconic and otherwise flavorful powers to still act as immediate actions, and prevents you from having to get too fiddly with banning specific themes. This is a simple way to get rid of the endless crap like Disruptive Strike and other "must-have" powers that make for slow, herky-jerky combat.

2. THE ALTERNATE RULE: As above, but players can also choose immediate action dailies. This allows a few more into the game, only they are far less annoying to deal with or sit through as they only happen once a day.

I think these are fair. I mean, I myself have built catch-22 Binder hybrids that are basically bred from annoying immediate actions; in other words, I have been guilty of adding to the problem, and can be honest with myself that it isn't good for the game. What happens is you end up with a lot of well-built PCs at the table, and even though its great for PC survival, you have a lot of off-actions going off that basically signify bathroom breaks.

The above options will make a difference in your game, especially at high levels. They also actually enhance the classes that remain able to to use them, as they make it more rare/special for these kind of actions to take place.

Thoughts? Anybody else houseruling immediate actions?