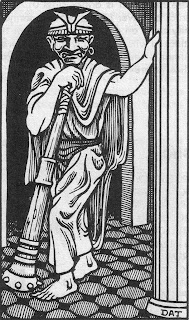 Howdy all. I am a big fan of the old-school "turn". The term has wargaming roots, and while I have seen some old games assign different amounts of time to a "turn", in all of the classic editions, a turn is ten minutes. In my upcoming zine, I bring the concept into 4e, and I thought I would encourage you do to the same.

Why? Well, it has nostalgic, old-school flavor for one thing, but it also gives some added versatility to DMs. You can track "in-game" time more accurately, and you can utilize the turn for everything from wandering monsters to rewards with random durations. You can use it in your adventure design in creative ways; perhaps the PCs are in an area that is patrolled once every 1d4+1 turns, adding a chance the PCs will get caught, depending on how slow they move through the area. Tracking turns gives the DM a good, rough sense of the time passing, and this is a good thing.

How? Take a page from the old editions. It doesn't have to be (and never will be) exact, and it isn't meant to be. It is a tool. In B/X, your "turn" speed was three times your "encounter speed". So you might see a speed listed as 120' (40'). Your turn speed (120 feet in this case) was about how far you would typically move in a dungeon in ten minutes, assuming you were being somewhat cautious. So for 4e, I take the slowest party member and multiple their speed times three. This is roughly the distance the party can travel in a dungeon on foot in ten minutes, assuming they are watching their step, mapping, or what have you. You can pretty much just eyeball this; it is a rough measure. I count an encounter plus the following short rest together as one turn, even though it isn't quite that long. If a party member announces they are searching a room, disabling a trap, reading runes from a wall, or anything else requiring real concentration and skill, it takes a turn. For any other scenario, judge as needed.

The next time you are putting an adventure or scenario together, consider trying to use turns as a tool. I really like giving alternative rewards that last for a few turns; you can afford to give them something really powerful, as it will not last very long at all. On the flip side, you can give PCs debilitating short-term conditions. Instead of an effect ending at the end of an encounter, perhaps it lasts 2d4 turns...long enough for the condition to make its presence felt without overstaying its welcome.

Any other "turn" lovers out there?
Posted by Jeremy "frothsof" Smith at 2:17 PM