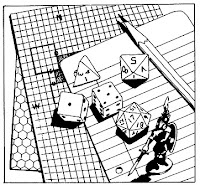 Howdy. I had a few disparate blog ideas running thru the head, and I realized they all could be used to dispel a few 4e myths, so I have combined them together. First off, don't get me wrong, 4e isn't perfect and I don't claim it to be. Readers of this blog know that I constantly tinker with 4e to make it something I like more. That's sort of the essence of D&D after all: making the game your own. But I am undoubtedly a huge fan of 4e. Anyway, here are some common 4e myths and my response:

"It is difficult to convert old modules to 4e"

I don't now who started this one, but it simply isn't true. I've mentioned before that I drop Skill Challenges from my games. One of the reasons for this is that, on its own, the 4e skill system is very smooth, intuitive, and covers pretty much anything that comes up (and if something else comes up, you can roll with Ability Checks). Anyway, in my experience the 4e skill system works like a charm in updated adventures. I updated Ravenloft (I6) for 4e. There are all kinds of roleplay moments, exploration, etc where skills came up. I just rolled with it if the players wanted to use one, or called for a check if it was really needed. So there is really no conversion necessary for an old modules' out-of-combat material. It can be handled on the fly quite easily.

The monster conversion is where the real challenges would appear to begin. Now, I am not going to say converting monsters from 1e to 4e is as easy as 1e to B/X or 2e, because it isn't. But 4e does have a strength that those games lack: 4e monsters have specific formulas to work from. This can help DMs determine difficulty fairly accurately, but more importantly, it is very easy to make 4e monsters. 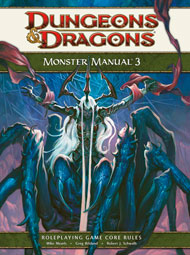 Confronted with the need to convert a monster in an old module, the first step I would encourage is to see if there is a 4e version within your party's level range. If so, check the source and see if it is post MM3. If it isn't, try these tips to upgrade old crappy monsters on the fly. If the monster isn't in your party's range, it is fairly straightforward to adjust. The design remains the same, you just plug in different numbers. Make sure you are using the DMG errata though.

If you can't find the monster in a 4e source, or if you don't like what 4e did the monster, build your own. This doesn't have to be laborious. Use this guide to make quick 4e monsters. Try to distill the essence of the original monster and keep it simple.

The last step is to make sure the adventure doesn't run like a sloggy mess. There are several ways to do this. You could drop the wandering monsters from an adventure and just run the prepared encounters, or you could drop a lot of planned encounters and instead just use the wandering monster tables. Or you could drop a little of both. This isn't just in response to 4e combat length (more on that below); the fact is, some old modules feel like a grind to begin with. You should also use Morale and Reaction Tables. If you are using an old module that has Morale scores, just port them over. Otherwise you can check my 4e Morale rules. Ok, so that leads us to the next myth.

This is simply not true. It is true that classic edition combat COULD be quicker, but it wasn't always. I know this because I DM and play old editions. At even moderate levels, old edition spellcasters could have a ton of choices, and adjudicating their effects was often not a cut and dried proposition. A typical PC's percentage chance to hit was often lower, so there are more misses. There were also huge throngs of monsters in old adventures, like all the time. I am reminded of one of my faves, Descent Into the Depth of the Earth, which was a combo module of D1-D2. There are like 20 Drow here, 40 Kuo-Toa there, 30 Troglodytes here. Heck, even in the Village of Hommlet, you will have 16 or more enemy combatants! 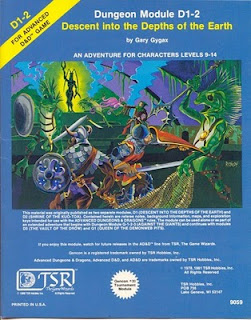 Now I KNOW combat can drag in 4e. I have tried to provide some tips and ideas to help with that. Simplifying monsters, using groups of the same monsters, using Morale, lowering hit points-all of this helps. But it is simply disingenuous to act like old combat couldn't take a while, especially when casters had some actual spells to cast. This has also been true of my experience with 5e so far. We had a two hour combat last week and we just hit level 2. Combat often takes an hour or more at level 1. I am not saying it isn't fun, or that this is too long, I am just saying that combat length can drag in multiple editions; it isn't only a 4e phenomenon.

"It is harder to houserule 4e than other editions"

I am tempted just to say "read my blog" as a response to this one, because there are dozens of houserule examples on here, but just to expound on it a bit, 4e is no different from any other edition of D&D. You can houserule it and make it your own with ease. The difference between 4e and classic editions is that the mechanics in 4e are "on display". The math is predictable and easy to grasp. This is already sort of covered above with monsters. This makes houseruling and homebrewing very easy. Since you have clear expectations for damage, defenses, DCs, etc at all levels, it becomes very easy to slide the scale towards "easy" or "hard". See Fourthcore. I have tweaked monster design, traps, disease, combat, and on and on, and I have only scratched the surface of the possibilities. 4e does not deviate from D&D's proud history of homebrewing and houseruling, it embraces it as much as any other edition.

That's all I have for you today. As always, I welcome comments! Take it easy!