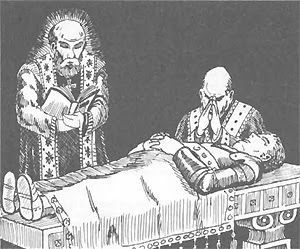 ok welcome to what i think might be the last in this series on memorable mechanics in your games, at least until im inspired to write another one. i am thankful for the comments and thoughts that readers have shared!

so i want to talk today about using unusual conditions in your game. 4e did some amazing things for the game, not least of which is codifying certain conditions. what this means is that you can play at multiple tables all over the world and be truly playing the same game. it makes DMing easy even if you have never met the table of players you are about to run a game for. unfortunately it can also be pretty stale and not make for especially memorable gameplay for the player or the DM. do not get me wrong here, i would not have conditions any other way, i love that they are set in stone. still, i think every game can benefit from experimenting with odd or extreme conditions. i also like to look at working with the existing conditions, and combining them to make new ones.

the first thing i like to do is to really forget mechanics completely for a minute and think about what i want to do the the PC. that sounds pretty sadistic, and... it is a little. oh well! next i start to think of how to express that 'condition' in the game. this includes deciding whether to include existing conditions as part of the new 'condition'. the down side of using known conditions is that it tends to make it easier for PCs to overcome the condition with a power, feat, and the like. the plus side is everyone knows the conditions already so they are easier to communicate already. i then try to make sure there is some new flavor or quirk to the condition that makes it special.

i thought i would share a few random thoughts and  'quirks' that you can use to bring extreme conditions to life in your games. i have provided at least one example for each tip.

1. have things go from bad to worse very quickly

example-i decide i want the big bad end guy fire elemental to literally melt a PC. so im thinking of the PC gradually melting into a puddle. i want to hit hard from the get go and i damn sure do not want them to be able to get off the hook easily. i decide i do not want a saving throw to be able to end it, i want this to be severe. so i am thinking the first turn after the melt starts, the PC takes a -4 penalty to basically everything: attack and damage rolls, defenses, speed. second round is -8 (if you reach 0 you just stay at 0). third round -12. you are insubstantial and basically a puddle on the ground. everyone has to roll acrobatics checks to avoid slipping on you. remove affliction reverses the melting process.

2. unusually long delays before the condition really sets in

example-i want to thump a PC on the head, but i want it to be flavorful. how about a severe concussion? i decide i want to use existing condition (daze) as part of a new one. the player is hit in the head one session and dazed save ends; after that everything goes on as normal. the players forget it happened. but two or three sessions later the PC wakes up with a -10 in knowledge based checks and has to make a check against self-harm or harming a party member once a day.

alternate example- the PCs are cursed by some hag. literally weeks of game time go by until the curse reveals itself in some delicate situation

3. hit them with permanent conditions

these are a titch tricky. the PC should still be playable, but significantly changed.

example-i decide i want to literally dismember a PC. like cut his legs clean off. i dont want him to be able to find the legs later. i decide i also do not want the condition to contain existing condition terminology. so, while i want to slow the PC as part of this condition, i do not want to use the word 'slowed' bc then the PC likely has a way around it. so instead of slowed i want to say 'the PCs speed is 2'. i decide the final condition is the PC has max speed (unless on a mount) of 2, regardless of feats. the PC also takes penalties to checks as per the DM. the PC is considered prone to enemies.


4. the 'hidden in plain view' approach

with these you want to have the method of ending the condition be something simple. sometimes those are the hardest for PCs to deal with.

example-i want to burn a PCs eyes with acid. i decide to use an existing condition (blind) along with some massive ongoing damage. this makes it easy to track and explain to the player. if the PC has anything to use vs blindness or to resist the ongoing damage for a time, he can. but the interesting part is there is no save from the blindness or ongoing damage; outside of combat the PC is still blind and takes the damage every ten minutes. the condition can be ended immediately if the eyes are simply flushed with water. if the PC asks if it is 'save ends'...answer with a cryptic 'i dont know yet'. or 'ill tell you when'.


you can go on endlessly in every direction with these. what kind of memorable conditions have you used in your game? what ideas would you add to the list?