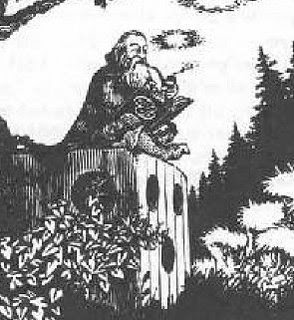 
Hello again. So I thought I'd throw some ideas out that are related to combat length in 4e. Lots of people complain about it, but outside of my game I have hardly EVER seen DMs have monsters flee. I mean the thrill is over, the monsters are not going to win, its in the grind stage, and yet the monsters are still there fighting. Other times, you want to get through a good bit of a dungeon or what not and you know that if you have two full combats you won't get there that night. Or you would really like to have wandering monsters but the thought of another combat on top of the ones you have planned makes your eyes glaze over.

Well, some of the old versions of D&D (and many retro-clones) have a morale system. Basically, this is a way besides intimidation and/or DM whim to give creatures a chance to flee. As a DM you basically accept the fact that some encounters might end pretty quickly, but you still retain the control to make some encounters be played through til the end.

Morale can change the way 4e is approached. You can still have your grand, planned-out encounters, but also throw in some random monsters without guaranteeing never ending combat. But how would this work?

The rules are basically identical to those of B/X. Assign a morale score. When the situation calls for a morale check, roll 2d6. If the roll is higher than their morale score, the monsters attempt to flee, surrender, or otherwise end the encounter; if it is equal to or less than the score, they stay and fight. There is no need to roll for 2s and 12s. For Solos and Elites, or if you want a monster to fight to the death, Assign the creature(s) a 12 morale (will never flee) or make them immune to fear. On the flip side, if it is some random monsters that are not very tough, are lower level than the PCs, etc etc,  give them a lower score. Here are the morale scores and how to use them:

12-Will not flee or surrender and/or immune fear, Solos, Elites
9-11-Unlikely to flee
6-8-Average
3-5-Weak willed; flees easily
2-Always surrenders or flees after the first death of an ally

This might appear to be slanted towards having a monster stay in the fight, but notice that you will check morale more than once.

-Roll once when the first monster is killed

-Roll once when half of the monsters have been killed, or less than half remain if you started with an odd amount

If the monsters have not failed a morale roll after this point, they will fight to the death unless intimidated (if possible) or otherwise made to surrender, flee, or what have you by the DM. Minions do not affect morale. When it is time to check morale, only roll once for the entire group of monsters; use the highest morale score of whichever monsters are left.

You may find it helpful to assign a creature variable morale; for example, a pack of bandits start with a morale score of 9, so as long as most of their allies are still alive, they are likely to stay in the fight. Later in the encounter, when half of the bandits are killed, their morale score is lowered to 4 for the second check, and they will likely flee. You could also look at just giving creatures a minor bonus or penalty to their morale score based on the circumstances of the encounter.


Example: Say I have a Solo that is going to fight the PCs. I assign it a 12 morale; there is no situation in which it would ever need to check morale. So, Solos typically don't flee unless the DM wants them to.

Example 2: Say I have 5 orcs and 2 bugbears, none of which are Minions, along with an Elite ogre. I give them all a 7 morale score except the Elite, who has a 12. The PCs fight the monsters and kill a bugbear. Since 1 monster has been killed, I would normally check morale, but as I use the highest remaining monster's morale score (the ogre's 12), there is no point in rolling. The fight continues. Over the next two rounds the PCs finish off the ogre and 2 orcs.1 bugbear and 3 orcs are still standing, half the number that started. I check morale again and get a 9, higher than the remaining monsters' score of 7. The monsters flee.

That's basically it. The DM has the control of which monsters will or will not flee, and Elites and Solos are already pretty much protected from fleeing. Yet it also allows for some encounters to end without turning to a slog. This of course then frees a DM to use larger populations for dungeons, to use wandering monsters, etc etc.

Morale allows the DM to be a bit looser with the number of creatures encountered, balancing the use of large numbers of creatures by assigning them a lower morale score. You can let the monsters hit harder at the beginning of an encounter, and 'get out' before it gets into a slog

You will see more of this in my upcoming zine. This is a way to get some old-school flavor in your game, while still allowing for set-piece planned encounters that 4e does so well. It also will help the game keep flowing and moving forward. This will, in my estimation, dramatically improve many published 4e adventures as well as home games. Please do not feel tied to this if you use it; if you want an encounter to keep going, just keep going.