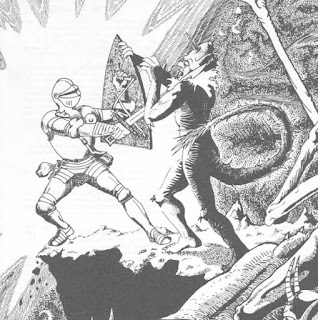 Hello, this is the first in a series on this blog about using unusual mechanics in your games. I decided to break it into parts so it wouldn't be too much of a wall of text.

The past few days I have been thinking about player assumptions in 4e. Basically, 4e has codified conditions; they do the same thing table to table. This is good, bc you can just tell a player they are slowed and everyone knows what that means. On the flip side, with limited conditions in the game, a player can basically prepare for everything. I have a high level fighter that can avoid daze, stun, immobilize, restrain, slow, etc etc. and that's absolutely fine, but this series is about defying the usual mechanics and bringing things your players have never seen to the table. In this first part we are looking at forced movement.

Forced movement in 4e games is usually something you see more from a players side, like that mage that has the At-Will slide 7, or a polearm build that slides, marks, and prones. Monsters usually only do a push 1 here or a slide 2 there. I urge you to shock your players with forced movement. Take their expectations and rip them apart.

Here is one from my home game. I had a frog-like beast that had a ranged 10 tongue attack that targeted 2 creatures. On a hit it obviously did damage, but also pulled them up to 10 squares into an auto-damaging Fly-Vomit Aura. Another idea I am working into the 1st 4e Forever adventure involves a powerful magnet. Any PC with metal weapons or armor gets pulled to it, regardless of distance, taking damage as they slam against it. Pull the PCs completely across the battlemat; the whole table will love it.

So here is another way to use forced movement to startling effect. The next time you have the PCs facing a controller type, shock them with cartoonish control. Try a power (possibly named "Can You Fly, Billy?") in which the PC takes damage from an attack and is hoisted 6-12 squares in the air. At the start of the PCs turn, he falls. You can also use wind or other environmental features to add some wild movement to an encounter. Perhaps the PCs have to roll an Acrobatics check at the start of their turns or be tossed into the air and over a cliff.

To get more flavor out of a push (or slide), push the PCs into things, and push them far. For example, consider the push actually pushing them across the mat and several squares into a wall. It damages them greatly obviously, and costs them extra movement to climb out of the wall. The squares around the new hole now have rubble and stone (difficult terrain) from where the PC smashed into it.

Teleport the hell out of them

Use helpless PCs as weapons

The psion has a power that allows it to use an enemy as a living missile to attack other creatures. I love it; it is great flavor. The next time you have a strong creature, say an ogre or dragon or what have you, have them grab, damage, and daze a PC on a hit. Then allow them to throw the PC at his allies. The further you throw them, the better. Maybe an area burst 1 within 10. Use the PC as a weapon.

I hope you have enjoyed reading these ideas. I am sure many of you have used some things like this in your home games, so please leave a post and tell me about them! Look for part 2 of this series coming soon!
Posted by Jeremy "frothsof" Smith at 10:39 AM