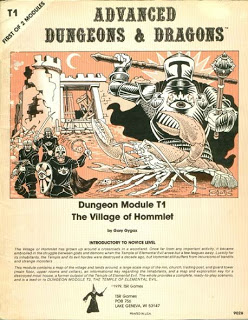 Gygax's The Village of Hommlet is widely regarded as one of the greatest intro adventures for D&D and for good reason. It is the template for thousands of adventures that followed, with its manageable "home base", down-the-road dungeon, and campaign-starter plot. One of the great things that doesn't get mentioned a lot is how it introduces several NPCs that are there just to befriend, then betray the players. This kind of diabolical double-crossing is highly effective when not overused, and can give campaigns a real cinematic quality, with a-ha moments and unexpected reveals. Here are a couple of other ways I have used friends and former allies against the PCs.

RISE OF THE MEATSHIELDS

It is not surprising that the 1e DMG spends so much time discussing the morale and treatment of henchmen and hirelings. After all, the term "meatshield" isn't exactly loving, and it reveals a long history of shoddy treatment.  How much abuse are they supposed to take? How many of their friends do they need to see die before they have mutiny on their minds? A well timed revolt can prove a disastrous reminder to the PCs that their actions have consequences. Henchmen can hold grudges just as easy as the villains of a campaign. This won't be appropriate for some tables, but if you have a group of players that flippantly churn through henchmen like butter, it could be a fun twist. They know the patterns and weaknesses of the PCs, and as the song says they "work hard for the money so you better treat [them] right". Their family members may also have revenge on their minds for lost loved ones; this can even allow for long-term plotting against PCs over years of game time.

I KNEW I RECOGNIZED THAT GUY

Undead are the gift that keeps on giving, especially when they kill PCs. PCs killed by undead will often rise again as undead themselves. Some very memorable encounters have happened in my games over the years when the party encounters a fallen comrade. This doesn't have to be driven solely as a combat challenge; you can play up the drama of seeing an old friend literally falling apart, or depending on the tone of your campaign, it could even be milked for comedy. Never let a dead PC go to waste.


Have you ever done anything similar in your games?

Posted by Jeremy "frothsof" Smith at 9:38 AM