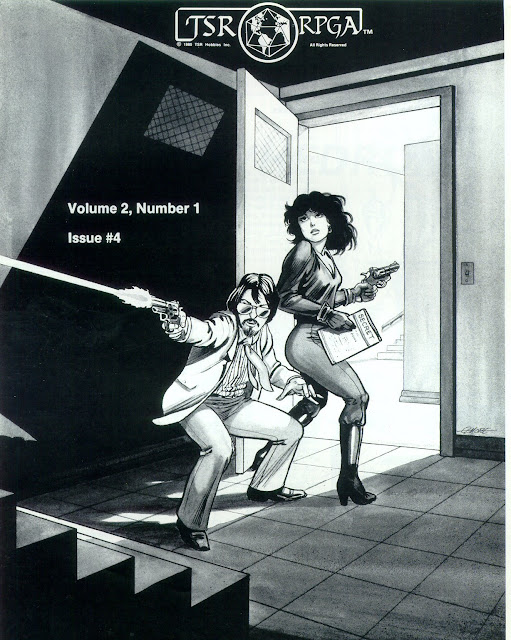 Wow, it is has been forever since I blogged. It is what it is. Today we look at Polyhedron #4. This issue is not dated, but must have come out sometime in early 82'. This issue is notable as it is the first issue to reveal the title "Polyhedron", still one of the great RPG mag names. A gent named Bill Huber won the contest to name it, and received a 2 year RPGA membership and a choice of RPGA module. Other possible names mentioned included "Quasit" and "Readings Gathered for Personality Assimilation". Wow.

So there is a cool Top Secret sort of Larry Elmore cover. Very 70s/early 80s, and I can picture the dude with a suitcase full of cocaine.

The letters section contains one from Gygax, who would often write letters to various TSR mags. Here he references the prior Jim Ward interviews and mentions the somewhat familiar story of how they met. Gygax basically noticed some of Ward's Appendix N-era books and invited him to play some games.

Mentzer's editorial mentions possibly producing AD&D posters of the core books, some notes on the AD&D tourney at Gen Con, and Gygax's yet-to-be-published cantrips for AD&D.

The majority of the issue is part one of an interview with Dragon editor/publisher Jake Jaquet. Just like previous issues, the interview is the highlight. It is great to read old interviews as they aren't really colored by the passage of time, and the answers, while undoubtedly tinged with a bit of marketing-speak, generally feel more accurate that interviews 30 to 40 years after the fact. Anyway, Jaquet talks about how he got the job and his philosophy for the mag.

The most interesting stuff comes as they start talking about Gamma World. Jaquet states that Gamma World came about from a series of anonymous notes, then simply titled "Mutant", given to him by Tim Kask to edit into something comprehensible. He and Jim Ward then worked on them, adding a bunch of ideas from Metamorphosis Alpha. The interview goes into some depth about the development of the game, what he would change if he was doing it all over again, and the ideas they had to expand it (that were never realized). I wonder how much truth there is to the anonymous piece; I always just assumed Jim Ward came up with it, although I admit I have never bothered researching it in any depth. Anyway, very interesting. The Jaquet interview will be continued over the next couple of issues.

There is a short piece by Don Turnbull extolling his love for illusionists.

Spelling Bee goes into detail about the fireball spell and lightning bolt, and the dangers of using them in dungeons.

Notes for the Dungeon Master offers a few trick and trap ideas, none of which are particularly intriguing, although the author does recommend using "THAC0", which I know was around long before 2e but here is implied to have been in wide use since at least 82'.

Dispel Confusion tackles the Wall of Force spell, holy water uses, and ways to learn spells if you blew your "chance to know" check.

Basically Speaking is a short article that aims to help new players. Very basic info such as dice notations, etc, and key pages of the Moldvay rulebook.

There are a few notes on upcoming RPGA events, then the mag ends with the first installment of the comic "Nor", in which a spaceship crash lands on a typical faux Middle Ages fantasy world. 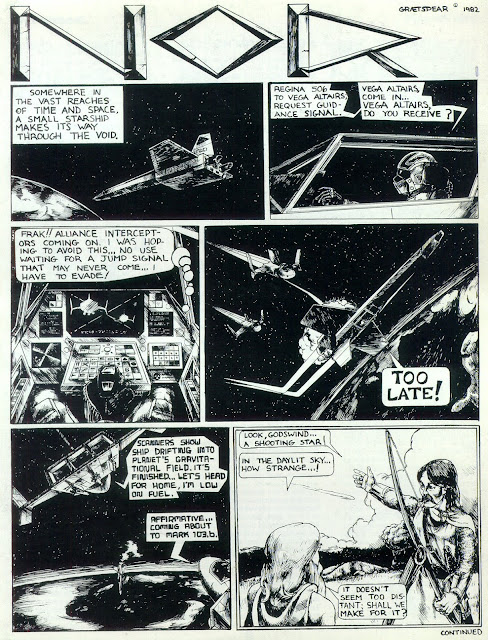 That's it for this issue! I will try to do these more often.