Princes of the Apocalypse: A Review

Ever since Rich Baker announced the formation of Sasquatch Game Studio, I have been keeping an eye on them, waiting to see what kind of stuff they will bring to the table. I am a big fan of Mr. Baker's work: Birthright has developed a hardcore cult following over the years, and much of his design for 4th edition is among the edition's best (such as themes). His experience with the game straddles the line from classic editions to the more modern iterations, and after his wonderful design work for the Starter Set adventure, Lost Mines of Phandelver, my expectations were very high for the new D&D campaign, Princes of the Apocalypse. It lived up to them in every way.

Unfortunately, the release of the first campaign book, Hoard of the Dragon Queen, was marred by numerous errors in the text, as well as some wonky formatting that made it challenging for new and experienced DMs to run. I think it got a bad rap, as it is still a very good adventure. I also sympathize with anyone trying to design a campaign of that scope while the rules are still being written. The editing was, I'm sure, a nightmarish process. But, at the end of the day, you are judged on your final product, and while Rise of Tiamat was a vast improvement in every way, its doubtful the Tyranny of Dragons storyline will ever be considered a classic. 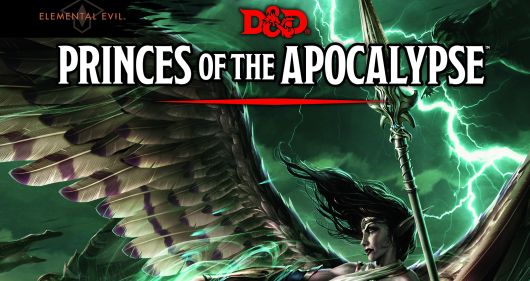 Princes, on the other hand, is a mind blower. I love the layout of this book. Part campaign setting, part player resource, part bad-ass adventure. The cartography is excellent throughout, there are dozens and dozens of new monsters, and there are just a lot of nice touches that really make it something special. For example, chapter 6 is devoted wholly to side treks; a couple to bring your PCs up to 3rd level, but many more that you can use to flesh out the geographical area and give your game that feel of a lot of things going on, not just a linear adventure. I LOVE that it is its own chapter, and I would steal this idea in a minute if I was ever to design something this enormous. There is also some good advice on running the game in different D&D worlds, including Athas, Krynn, and Oerth. The new take on the genasi race is welcome, and many of the new spells are flavorful must-haves.


If forced to criticize anything about the book it would be that the full player's supplement released for the adventure is not reprinted in full. I am not sure the reasoning behind that, but it would have been nice to have had all of the new options in one book. Anyhoo, not that big a deal. I would also say that converting this adventure to a classic edition would be a supreme pain in the rear, as there are so many new monsters and NPCs with idiosyncratic details that it would take forever. Some 5e adventure conversion is as simple as switching out skeletons. Not so here. This is a mammoth, complex adventure, full of new material.

Baker and company have set the bar very high here for whomever WOTC utilizes for their next storyline. This is an epic, well-written adventure with a lot of seriously challenging encounters. I'm quite happy with this purchase and I'll continue keeping an eye on Sasquatch, as these guys really know what they are doing.
Posted by Jeremy "frothsof" Smith at 7:38 AM