So the other day I read someone, somewhere, categorizing the giant rat as a “throw-away” monster. In fact, they went so far as to imply that an adventure that uses giant rats is boring and/or uncreative. I personally love giant rats, but like many monsters, its really the way that you use them that is important.

This sort of thing was covered before in the famous Dragon mag essay “Tucker’s Kobolds”. Kobolds are weak on paper. A few kobolds in an empty room with a couple of slings is not a memorable or challenging encounter. However, put a few dozen crafty, cunning kobolds together with some traps and you can cause some real havoc. Creative use of monsters is the thing.

I like the game world to be reactive. I like player actions to have consequences. Try this the next time you have a group of players exploring a dungeon, leaving a trail of gore and viscera in their wake, with no attempt to conceal or hide the carnage. After a few hours, I figure the stench is going to start to attract rats. Lots of them. If the party spends another few hours venturing further into the dungeon, or better yet, attempts to spend the night in some barricaded room, I make it a point to infest the bloodiest encounter sites with hungry rats. Tons of them. Dozens and dozens of them. Dozens and dozens of diseased rats. 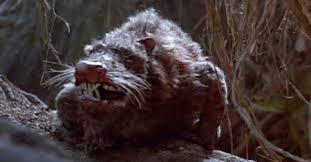 Later, if the party has to flee the dungeon, or if they are haughtily and confidently heading out for the night, assuming they won’t encounter anything on the way back, they come upon the rats. Only now, the rats aren’t weak 1 HD throw-away monsters. Now the rats are in a feeding frenzy, swarming, blocking the passage. Rife with plague. Horrifying and feral. Exploding from a dead Orc’s chest cavity. Pouring from the mouth of a dead Hobgoblin. They double back, but another dozen is rambling down the hallway. They try the side door, and more spill out. Hungry. Mangy. Tucker’s Giant Rats.

On a sad note, Aaron Allston has passed away. I will always be amazed at the sheer output this guy had. Some people are seemingly born to write. Allston never seemed to run out of creative ideas. RIP.
Posted by Jeremy "frothsof" Smith at 2:07 PM