Oh man. Sometimes you see something so awesome that all of the worries and cares of the world just wash away. Such was my response to the news of Goblinoid Games' Friday the 13th release, CRYPTWORLD.

Many have no doubt heard of Goblinoid Games already. Their free retroclone of the B/X rules, Labyrinth Lord, is one of the most beloved and well-supported of all OSR systems, and their titles such as Mutant Future and Starships and Spacemen show these folks have a real knack not only for humor, but for game design. They are skilled at applying familiar, straightforward rules to multiple genres.

I don't know the legal bits behind it, but they also appear to have the rights to Pacesetter, a long defunct game company that was active during the mid 80s. They have re-released some old titles, such as Timemaster (which looks totally awesome by the way).


Anyways when I saw the image for CRYPTWORLD, I immediately Googled it, incensed that I must have missed this amazing artifact in gaming history. Turns out the facts are much, much cooler than that. 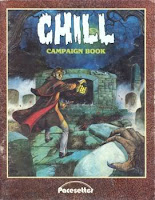 You see Pacesetter also made an awesome horror rpg game called Chill. Chill isn't really about gory horror (although recently I had a gaming fantasy of mixing Chill with Kult into an unholy homebrew). It felt more like spooky, classic-movie-monster horror, with a touch of Scooby-Doo. Anyway, it had a lot of cool mechanics like the "Action Table". 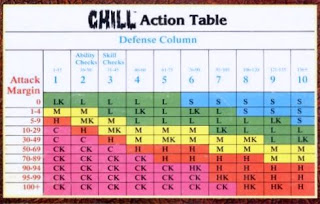 So here is the awesome part: while CRYPTWORLD is a new game, it is apparently heavily influenced by Chill. In Chill, PCs are basically investigators for a secret organization called S.A.V.E.. CRYPTWORLD will expand this idea to include several other groups. I am assuming that since they are using the Pacesetter logo on the cover that other Chill fluff and mechanics will be in the game. Will we see the Action Table? God I hope so.

Check out the full details HERE!
Posted by Jeremy "frothsof" Smith at 1:59 PM