Dragon 416 is Compiled! Plus Froth Does Strahd!

Quick post to say that Dragon 416 is out, and they have gone back to compiling the issues. All I can say is thanks for that! It is good to see Strahd get some 4e love, although the poor guy didn't get a stat block. I guess I will have to make him one in honor! I decided to use the 4e Forever stat block if you are wondering what the heck you are looking at. 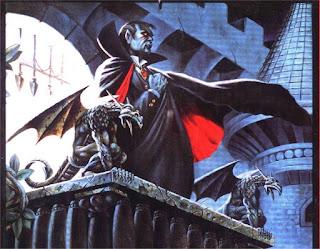 STRAHD VON ZAROVICH
LEVEL 19 SAVAGE   XP: 4,800
MEDIUM NATURAL HUMANOID
HP: 344 (172)   MOVE: 8”, Fly: 8" in Bat and Gaseous form   INIT: +23   AP: 2
NO. APPEARING: Unique   ENC RNGE: Special   MORALE: 12
AC: 33   FORT: 31   REF: 32   WILL: 32
SENSES: Darkvision; Blindsight 10 in Bat form; Truesight 10 in Gaseous form
TRAITS:
-Aura 2: Any enemy that enters the aura takes 10 psychic and necrotic damage. A creature can take this damage more than once per round.
-Immunities: Stun, Dominate, Fear, Polymorph, Charm, Unconscious, Out of Play
-Strahd can take a complete turn both on his Initiative and his Initiative -10.
ATTACK:
-Manipulation: (Standard Action; At-Will; Close Burst 1; Each creature in burst); +22 vs WILL; 3d12+10 damage, and Strahd slides the target up to 5 squares to a space adjacent to an ally of the target. The target then must make an At-Will or unused Encounter power of Strahd's choice against the ally as a Free Action. Treat a Manipulation attack as Strahd's MBA.
SPECIAL ATTACKS:
-Fangs: (Minor Action; At-Will; Once per turn; Melee 1; One attack; One creature); +22 vs FORT; Ongoing 20 necrotic damage (save ends)
-Minor Manipulation: (Free Action; At-Will; Once per turn; Ranged 10; One attack; One creature); +22 vs WILL; 10 psychic damage, and the target is slid up to 5 squares
-Triggered Action: Strahd makes his Manipulation attack as a Free Action when first bloodied.
SPECIAL MOVEMENT:
Once per turn as a Free Action, Strahd can shift into one of three forms: a Swarm of Bats, a Wolf, or a purplish Gas. Strahd automatically reverts to his original form after he makes an attack. In each form, Strahd gains enhanced movement abilities, listed below.
-Swarm of Bats: Strahd does not provoke Opportunity Attacks when moving away from creatures.
-Wolf: Strahd's base movement increases to 14”
-Gaseous: Strahd can teleport 4” as a Move Action.
LANGUAGES: All known   INTELLIGENCE: Very
TRAINED SKILL BONUS: +23
UNTRAINED SKILL BONUS: +14
SAVING THROW BONUS: +2   ALIGNMENT: Chaotic
Posted by Jeremy "frothsof" Smith at 3:47 PM